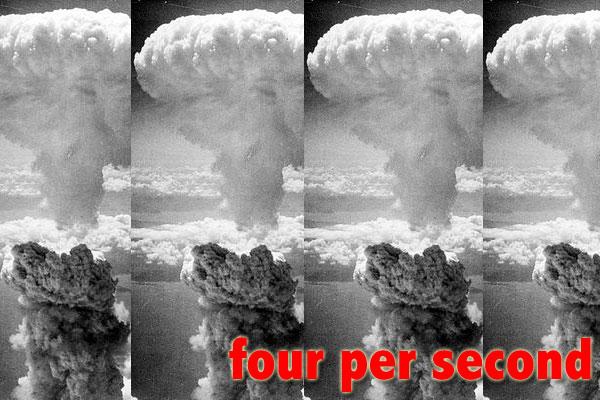 On August 6, 1945, the bomb doors on the Enola Gay opened above the Japanese city of Hiroshima. An atomic bomb packed with 60 kilos of uranium fell for less than a minute before exploding with the energy of thirteen thousand tons of TNT. The radius of "total destruction" extended a mile in every direction. The force of the blast killed an estimated 70,000 people instantly. 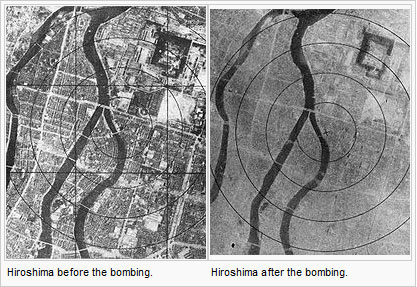 Unnoticed by the world at the time, the Enola Gay was also releasing a much more subtle threat to humanity: an invisible, odourless and tasteless gas called carbon dioxide. Even today, a third of Enola Gay’s CO2 from that mission is still up in our atmosphere and around a sixth will be there for millennia. Most of the CO2 that does leave the atmosphere dissolves into our oceans, acidifying them.

The amazing persistence of CO2 in the air has allowed billions of our small emissions, like those from the Enola Gay, to amass into an ever growing threat to civilization. How fast is that threat growing? In a must-see TED talk, NASA climate scientist James Hansen say the current increase in global warming is:

"...equivalent to exploding 400,000 Hiroshima atomic bombs per day 365 days per year. That’s how much extra energy Earth is gaining each day."

That's 278 atomic bombs worth of energy every minute – more than four per second -- non-stop. To be clear, that is just the extra energy being gained each day on top of the energy heating our planet by 0.8 degree C. It is the rate at which we are increasing global warming.

Even if we stopped burning all fossil fuels tomorrow, our past CO2 emissions will continue to add hundreds of thousands of A-bombs worth of energy each day for years. Global temperatures will continue to rise and extreme weather events will continue to get more extreme for decades. It will take nearly a century for enough of this CO2 to be removed from our atmosphere to return our planet back to the temperatures and weather energy levels we are experiencing now.

The weather right now is tamer than it is going to be in any of our lifetimes. We have a lot more heat, energy, damage and misery already "in the pipeline" from our past emissions.

But of course, we aren’t stopping fossil fuel emissions tomorrow, are we? In fact, most people are doing just the opposite, burning more every year.

"The stark reality is that global emissions are accelerating and new efforts are underway to massively expand fossil fuel extraction, by oil drilling to increasing ocean depths, into the Arctic, and onto environmentally fragile public lands; squeezing of oil from tar sands and tar shale; hydro-fracking to expand extraction of natural gas; and increased mining of coal."

In BC, we are rapidly expanding production of fracked gas and of coal. We are also seeing multiple large pipelines and super tanker projects being pushed through to allow tar sands extraction to expand more rapidly. BC’s total carbon economy – exports plus burning – is exploding. Our BC Liberal government, led by Premier Christy Clark, is approving and promoting these huge increases in carbon extraction.

Hansen also just published a widely-read New York Times article titled "Game Over for the Climate" that opens with the following statement: "Global warming isn’t a prediction. It is happening."

The effect of adding another 278 A-bombs worth of energy every minute is turbo-charging our weather to the point where it is now spinning off one record extreme event after another.

Hansen predicted back in 1981 that unrestricted fossil fuel burning would turbo-charge our weather to the point that around 2010 extreme weather events would become frequent and obvious.

Sure enough, the weather data shows this is happening. In a peer-reviewed article about to be published, Hansen proves that many of the extreme weather events in the past few years were "caused by global warming." Time magazine got the exclusive preview: "Global Warming: An Exclusive Look at James Hansen’s Scary New Math"

We find ourselves now at a transition point in which climate change is shifting from an intellectual idea to an in-our-face physical weather threat. As Hansen points out, we are literally accelerating into that extreme weather threat at the rate of 400,000 A-bombs worth of new energy every day generated by our past emissions. Instead of backing off the accelerator by cutting down on dirty fuel extraction we are pressing the pedal to the metal by rapidly increasing dirty fuel extraction. Future generations -- as well as current ones -- will not be happy with where this is going.

Warmer air can hold more water. Last year, NASA said satellite measurements showed it rained so hard around the world that the oceans fell. One of the most recent of these epic floods happened in Thailand. This one weather bomb wiped out 18 per cent of their GDP. To understand what that means, consider that the tar sands are 2 per cent of Canada’s GDP. It was an economic disaster 35 times greater than anything in their history.

Last year, Hurricane Irene became the most damaging category 1 hurricane in US history, doing $15.8 billion in damages. Covered bridges that had withstood everything nature had thrown at them for over a century were swept away like match sticks. It was the third 500-year climate event in the last twelve months in the region.

"We can say with high confidence that the recent heat waves in Texas and Russia, and the one in Europe in 2003, which killed tens of thousands, were not natural events — they were caused by human-induced climate change."

Russia had to cut off grain exports for over a year, driving up food prices globally. Texas lost billions of dollars and saw their cattle and rice industries decimated. It was drier than any year of the great Dust Bowl. Mexico reports that 40 per cent of the country's agriculture has been destroyed.

This March, an unprecedented heat wave swept much of North America, setting 15,000 high temperature records in a single month. So extreme was this heat that 21 locations broke century-old, all-time-hottest temperature records – during the coldest point in the night. The low for the day was hotter than any previous high. This just doesn’t happen. Or at least it didn’t happen in our old climate. Now we have a climate on atomic steroids.

Twenty-five US states recorded their hottest March in 116 years of record keeping. The freak heat caused fruit trees in Ontario and Quebec to bloom weeks early, only to be hit by a brief cold snap. Already, 80 per cent of the apple crop in these regions has been destroyed. It turns out that food crops just don’t like freak weather.

Off our west coast, wave buoys are reporting that extreme wave heights have been increasing one foot every three years. Record smashing low-pressure storms have been sweeping across North America from the Midwest to Alaska. A record low pressure storm last year raised sea levels up to two feet in our area just from the lack of pressure pushing down on the ocean.

The south Atlantic used to be too cold to produce hurricanes. Not any more. Rising ocean temperatures in the last few years have passed a critical threshold and the first two hurricanes have formed off Brazil.  That’s more than just a new weather record, that’s a whole new category of extreme weather.

It takes an incredible amount of energy to produce large hail....