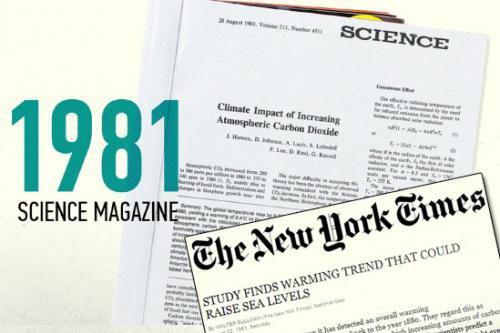 The first Earth Day, on April 22, 1970, exploded onto the scene as millions of college students held environmental teach-ins. Since then, Earth Day has become an annual and worldwide event.

I’m sure many great things have come from those 42 years of Earth Days. I’ve enjoyed many of them. But when it comes to moving society toward effective action on climate change and its evil twin ocean acidification, these Earth Days have become the equivalent of butterflies splattered on the windshields of our accelerating dirty energy party wagon.

In 1970, the average Canadian was busy was dumping 15.7 tonnes of CO2 every year into the atmosphere and oceans. Today, with the benefit of forty two Earth Days under our belts, we have managed to cut our climate pollution down to 16 tonnes each.  Oh wait … that is more climate pollution, not less. Splat.

When you include other greenhouse gases, we are now over 20 tonnes each. If you bother to count the gigantic flow of fossil fuel exports that we also profit from – like BC coal, Alberta tar sands, frack gas -- then our footprint gets even larger.

Back in the first year of Earth Day, Canada as a nation was the 10th largest emitter of carbon on the planet. Over the last four decades we elbowed our way up to number eight. Along the way, Canada found ways to increase annual carbon pollution by 60 percent.

When it comes to the climate threat, our most consistent response to Earth Day has been to saddle the Earth with a bigger whack of climate pollution than the previous year.

The first Earth Day events celebrated in Canada were on September 11, 1980. Who knew, way back then, that our climate pollution was even a problem? Who, that is, besides James Hansen at NASA? 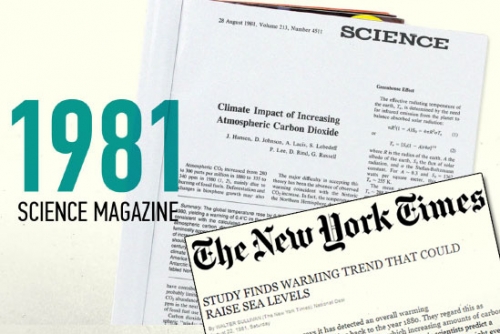 In 1981, just a few months after the very first Canadian Earth Day, Hansen published a paper warning us where we were headed. Here is the key chart from that 30-year-old paper: 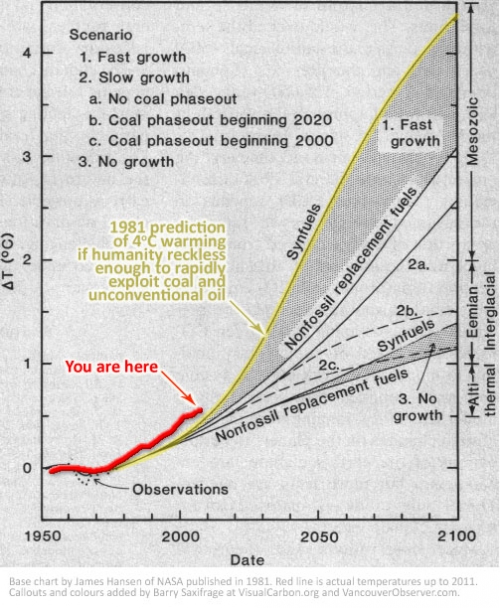 There are a lot of different lines on this chart, but you only need to look at two: the yellow line and the red line.

The yellow line (highlighting added by me) is Hansen’s 1981 projection of the global warming that would result from a worst case scenario of fossil fuel pig out by humanity. Hansen said that if we were stupid enough to choose huge quantities of the dirtiest energy sources -- like coal and unconventional oil -- then we would heat the Earth more than 4 C before 2100. Sadly he underestimated our stupidity.

The red line I added shows the Earth’s actual temperature readings so far. As you can see, the planet has been running a fever beyond Hansen’s worst case scenario from 1981. Instead of heeding the scientific warnings and developing clean energy, we choose to increase the amount of fossil fuels we dig up each year and burn. In fact, in recent years, the pace of dirty carbon fuels we extract and burn has been accelerating, rather than decreasing.

We have known since those early Canadian Earth Days over three decades ago what choosing a hyper-dirty energy path would lead to. We ignored that warming, just as we have ignored every other warning since. As the saying goes, if you don’t change direction you end up exactly where you are heading.

Sure enough, recent warming projections for where we are heading now exceed Hansen’s earlier worst case of 4 degrees by 2100. A couple of years ago an M.I.T. study stated bluntly that we are now heading for 5.5 C this century and concludes: “there’s no way the world can or should take these risks.”

International Energy Agency recently warned: “The world is perfectly on track for a six-degree Celsius increase in temperature. Everybody, even the schoolchildren, knows this is a catastrophe for all of us.”

The problem for you, me, our kids and everyone else is that even 2C of warming is considered to be too dangerous for humanity. Leaders of every major nation on Earth, including own Prime Minister Stephen Harper, have repeatedly said we must not exceed 2C warming. It is too dangerous. The costs will be too high.

And yet these same leaders are doing absolutely nothing effective to stop in time. Nothing. Zip. Nada. Heck just look at what Canadian politicians are trying to shove through right now: