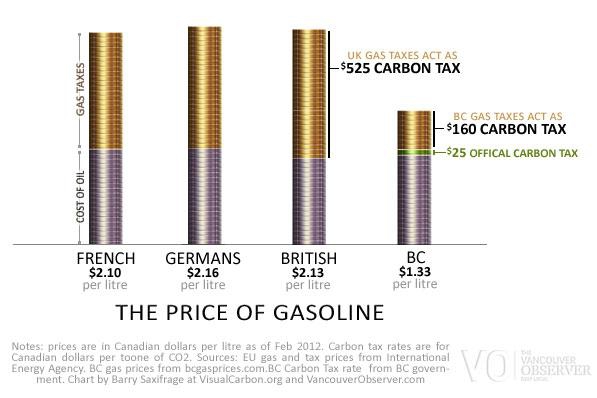 All taxes on carbon fuels work as carbon taxes. When any tax raises the price of a carbon fuel, like gasoline, the marketplace will soon find ways to use less of it.

Recently, I read about how the British government raised gas taxes in the 1990s in a partial attempt to reduce carbon pollution. It got me wondering how other gas taxes compare to BC's official carbon tax. So I did the math, and the results surprised me.

As my chart above shows, gas taxes in Britain, Germany and France are equal to an unofficial carbon tax of $500 per tonne of CO2. None of their gas taxes are formally called carbon taxes, but they act as such.

Here in BC, we have provincial laws, national treaties and a rapidly deteriorating climate that all say we have to achieve a similar low level of CO2. As the chart shows, our effective carbon tax is $185 – three times smaller. And smallest of all these taxes on carbon fuels is our official BC Carbon Tax of just $25.

Why would the British, French and Germans impose such gas taxes on themselves? The reason, as my previous article pointed out, is that they enjoy a lot of benefits that emerge from their consistently higher gas prices. Compared to them:

So, out of curiosity, I looked at a scenario in which we in BC choose to converge on British gas prices over a decade.

I think that bears repeating as it is crucial to our relative levels of success at achieving low-carbon prosperity and low-carbon mobility: the British, French and German economies are reacting to a carbon price that is $300 higher on gasoline.

In a scenario where we converge on their gas prices in a decade we would add another eight cents to our gas tax each year. That will increase our gas prices between three and six per cent each year. Actually, this is what the British intentionally did decades ago. Here is the story...