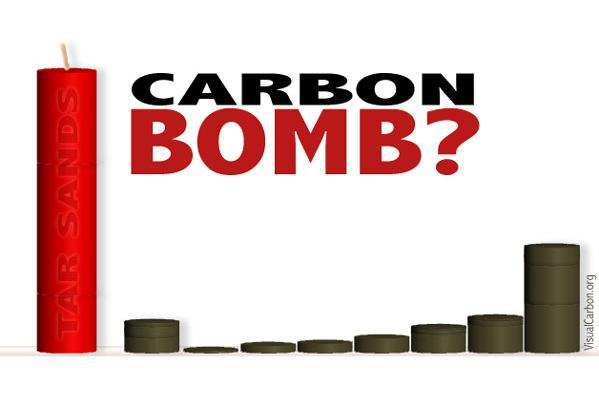 Last week I published a chart comparing potential tar sands CO2 to past Canadian emissions. I received a number of requests for similar charts that compare Canada's tar sands to other nation's emissions such as China, USA or a major EU nation.

Rather than make multiple charts, I decided to create one bar chart to rule them all. 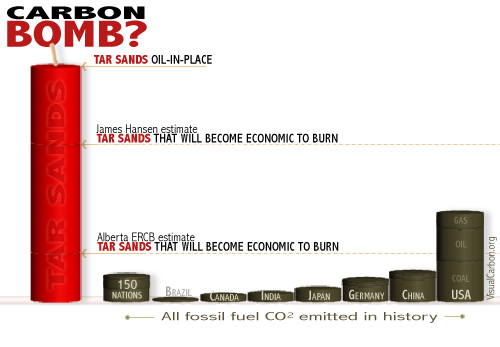 For this chart, I removed all the categories of tar sands estimates except this critical one:

How much carbon will eventually become economic to burn

This determines the climate damage that will eventually emerge from the tar sands under business-as-usual policies. So far I’ve found two published estimates for this.

In 2006, the Energy Resources Conservation Board (ERCB) of Alberta estimated that the amount of bitumen (carbon) in the tar sands that will eventually become profitable would be double what it is now. This is the lower of estimate lines on my chart. As you can quickly see, it is far more than all the fossil fuel CO2 ever emitted by any nation on earth except USA. It is also more than all the natural gas ever burned by humanity.

In 2011, climate scientist James Hansen of NASA estimated that the amount of bitumen that will eventually becomes profitable could be six times what it is now. In a speech he gave after being arrested at the White House for protesting the expansion of the tar sands, Hansen said that this was roughly equal to all the coal ever burned by humanity.

[It] is a conservative estimate of potential emissions from tar sands because:

(2) the total tar sands resource is larger than the known resource, possibly much larger,

(3) extraction of tar sands oil uses conventional oil and gas, which will [add to total CO2]…,

In support of Hansen’s first point, the economically extractable amount has indeed grown with technology development and oil price. Over the last fifteen years the amount of profitable bitumen grew more than 25 times larger as a result.

In support of Hansen’s third point, the use of oil and gas in the extraction of tar sands has been shown to significantly increase the CO2 footprint of each barrel. The latest estimate I’ve seen puts this at an additional 18% more CO2 per barrel.