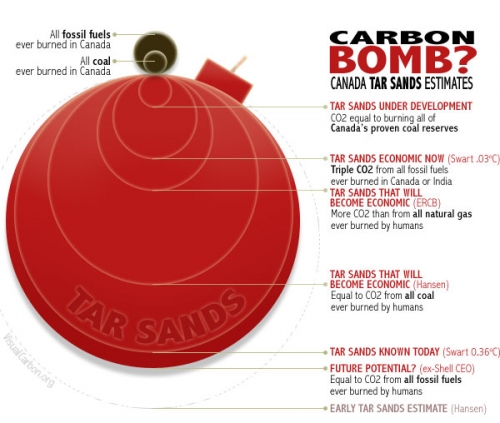 These are leases where bitumen is actively being extracted today. Extracting and burning this carbon will release about three times as much climate pollution as all Canadian coal burning so far.

There is a lot more profitable bitumen that isn’t leased out yet. This component is usually called “economically viable” or “proven” reserves. Dozens of new leases are being applied for right now as global corporations rush in to develop this.

Extracting and burning it all would emit three times more climate pollution than either Canada or India has done so far in their history. This climate impact would be six times greater than from Canada’s economically viable coal reserves.

Estimates of economically viable tar sands are based on oil staying below $70 per barrel through 2016. The current price is over $100, so these estimates may increase again soon.

As both technology improves and prices rise the amount of bitumen in the tar sands that becomes economically viable rises. For example, over the last fifteen years the amount of profitable bitumen grew more than 25 fold.

In 2006, the Energy Resources Conservation Board (ERCB) of Alberta estimated the amount of profitable bitumen will eventually double. Emissions would be greater than all the natural gas burned by humanity so far.

In 2011, Climate scientist James Hansen of NASA estimated that the amount of bitumen that eventually becomes profitable could be six times higher than now. In a speech he gave after being arrested at the White House for protesting the expansion of the tar sands, Hansen pointed to this huge potential for climate pollution that would eventually be released under business-as-usual in the tar sands. He calculated that it was roughly equal to the climate pollution released by all the coal humans have burned so far.

The current estimate for every last known chunk of bitumen in the tar sands is much larger still. It is considered extremely unlikely that all the bitumen in a deposit could be extracted.

A former CEO of Shell Canada, Clive Mathers, estimated the tar sands might eventually be found to hold two trillion barrels. This would require geologists to discover much more bitumen in the region.

Should two trillion barrels ever be extracted and burned it will emit about as much CO2 as all the fossil fuels burned by humans so far.

One early estimate by James Hansen of the tar sands put the climate pollution potential at much larger still -- about 25% larger than the two trillion barrels estimated by CEO Mathers. This has been shown to be beyond what is currently known to exist.

How much is too much?

As the potential for tar sands climate pollution gets clearer, Canadians can hopefully be more effective in addressing these urgent questions:

A full size version of this chart can be found on my VisualCarbon website.