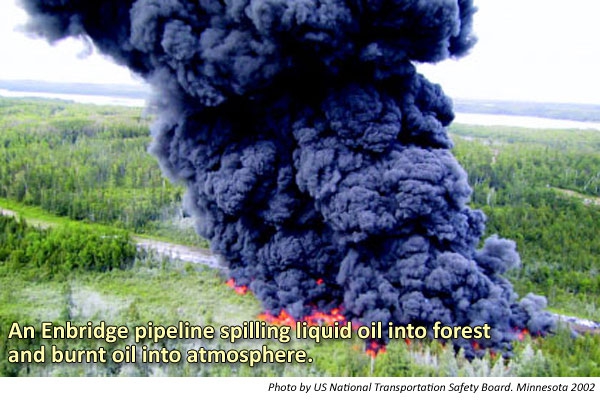 The proposed Enbridge pipeline across B.C. would open the door for more than a billion additional tonnes of carbon to be pulled out of the tar sands and vaporized into our climate system. Whether this carbon is vaporized from a pipeline accident (like the one pictured above) or when burned later in China, the resulting climate pollution would be the same.

Estimates of the economic damages caused by this climate pollution range from tens of billions to hundreds of billions of dollars.

Every tonne of CO2 that humans spill into the atmosphere further destabilizes our climate and acidifies our oceans. These changes cost human society, both now and into the future. Economists call the economic damages from these changes the Social Cost of Carbon (SCC).

A recent survey published by the Canadian think tank Sustainable Prosperity looked at over two hundred estimates of the Social Cost of Carbon by economists worldwide. The middle third of estimates ranged from $6 to $27 in economic damages per tonne of CO2. The mathematical mean was $42 per tonne. Ten percent of these estimates topped $95 per tonne. Environment Canada estimated $27 a few years ago. The UK government’s famous Stern Review on climate change used $25. This is similar to the current BC Carbon Tax rate of $25 that Gordon Campbell’s government legislated for BC residents and businesses. (Note: all monetary values in this article are in 2011 dollars).

Applying these values to the 8.5 billion barrels of tar sands that the proposed Enbridge “Northern Gateway Pipeline to our Atmosphere” could pump out, yields economic damages ranging from $28 billion to over $400 billion.