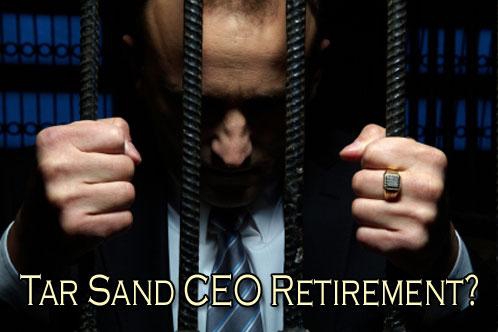 What started as a miserable, terrible, horrible month for “ethical [sic] oil”, multi-nationals turned downright menacing on September 30 in a London courtroom.

The UK Supreme Court was the setting for a test trial featuring real judges, top lawyers and a by-the-book public jury. A fictional tar sands CEO, backed by a legal team, defended himself against a proposed UN law punishing “ecocide.” This high-profile exercise was the first real-world test of who would face jail time should ecocide be added to genocide, crimes against humanity, crimes of aggression and war crimes as the fifth UN crime against peace. Quite the list, eh?

As the jury filtered back in, the question hovering in the air was whether the people now leading the push to tear open Canadian boreal forests and unleash the gigantic “carbon bomb” of the tar sands would be found guilty of ecocide? Would their future corner office come with bars?

As the Guardian newspaper reports:

Real lawyers, judges and a public jury found the CEOs of fictional fossil fuel companies guilty … as a result of their company's extraction of oil from tar sands in Canada.

Polly Higgins, the driving force behind the trial and who is working to have ecocide join genocide and three other crimes against peace in the UN, said: "For me the trial was a moment of truth. No longer is it acceptable to pursue profit without consequence. … Surely it is now the time to prosecute the true destroyers of our world."

She added: "I'm not keen to see lots of [people] in the dock. What I want to see is people making responsible decisions… [in which] the ethical imperative trumps the economic imperative"

Doesn’t sound like the “ethical oil” branding is working too well across the pond. Note to tar sand CEOs: you might want to double down on the marketing and lobbying budget, pronto.

Just how likely is it that “ecocide” will be added as a UN crime? The Guardian article continues:

…ecocide could become an international crime by amendment of the [International Criminal Court] ICC's Statute of Rome, which would need 86 nations to back it. Are there 86 states backing the ICC who feel climate change, the crisis in the oceans and other environmental problems are trashing their "peaceful enjoyment" of the Earth's bounty? I wouldn't be surprised if there were.

In an interesting coincidence, the climate-destabilizing pollution coming out of the Alberta tar sands is now more than from the economies of -- you guessed it -- 86 nations. Combined.  Here they are:

As the inset chart above shows, they are pulling out all the stops to try to“more than double” tar sands annual climate pollution in just the next ten years. Heck, the government of Alberta even brags about it. And well they should. It takes a lot of moxie to ramp up climate pollution at that scale – technically, financially, ethically, legally and socially. Oh, and add “staying out of jail” to that list.

At the level they are gunning for  – 3.2 million barrels a day – the tar sands will produce 600 million tonnes of carbon pollution a year by 2019. That is 18 tonnes of CO2 a year per Canadian. Or 166 tonnes a year per Albertan. Talk about a world record climate obesity problem. Wow. Ick. Sounds like it might be time to stop the “ethical binging”.

In a world that is quickly realizing that Big Misery comes from Big Carbon you would think the tar sands “carbon bombers” would be a tad less reckless, aggressive and extreme in their undertakings. Seriously, when just a few individuals are directly responsible for deciding to create and market a billion tonnes of climate pollution per year, I’d say there are some heavy liability issues for them if that pollution causes problems.

But for now those few CEOs have decided it is pedal to the metal, come hell or high water. Which leaves us with the question of just how much more hell and high water will it take before 86 nations to vote for protection from ecocide?

If the last month is anything to go by, it won’t be very long.

“This summer, we had 1,200 people from all 50 states. They weren't radicals in any sense. Not in the sense that oil companies are radicals, whereby they are altering the composition of the atmosphere, just about the most radical action you can imagine.”

With a product as dirty, dangerous and metastasizing as the tar sands – and with the laws of physics running against them -- the CEOs responsible for cranking open the “ethical pollution” spigots just might find themselves eligible for special retirement status after all.

But what about our politicians, like Stephen Harper and Ed Stelmach?

What about Stephen Harper?

Corporate CEOs were the subject of the ecocide test trial in the UK. But traditionally politicians have often been the ones haunted, hunted or hauled into the ICC dock.

Take Dick Cheney and George Bush. Ex-White House insider, Col. Lawrence Wilkerson, says Cheney "fears being tried as a war criminal." And for goodreason. Amnesty International calls for the arrest of former US President G. W. Bush whenever he lands in a nation that is a member of the International Criminal Court. Like, say…Canada.

Prime Minister Stephen Harper has been leading Canada’s government for over five years now. The Harper government has total control over how much climate pollution wafts out of the Alberta tar sands operations. Air pollution is a federal jurisdiction. Everyone agrees on that, even the polluters.

The rapid growth of tar sands climate pollution under Stephen Harper’s watch is the primary reason Canada is failing to meet our Kyoto commitment, or our much weaker Harper commitment #1, or our even weaker Harper do-over commitment #2 (aka Copenhagen Accord pledge). Big Stephen has all the power he needs to slow and reverse our Big Tar climate pollution. He could do something about it.

UVic Nobel laureate and world famous climate scientist, Andrew Weaver, recently summed up our federal government’s climate policies: “This will be quick. There aren’t any.”

Somehow, I don’t think the evidence phase of the trial would take very long.

The physical tar sands resources – those gargantuan landscapes of ancient carbon -- are totally under the control of the province of Alberta. According to the Government of Alberta:

It is the Alberta provincial government that decides exactly how much carbon pollution can be dug up in the first place. Future prosecutors could quickly add up the carbon pollution leased for vaporization by Premiers Ralph Klein (1992-2006) or Ed Stelmach (2006 – 2011). Alberta’s new Premier, Alison Redford, is getting a late start but could quickly pass the other two up in potential culpability given the huge push to pollute going on there right now.

The Alberta government not only decides how much gets dug up, they also decide how much pollution pricing to levy on each tonne of carbon extracted from the Crown’s resources. Right now that pollution pricing is running at zero dollars a tonne. Probably not high enough to mitigate very much of the harm being caused by it.

A carbon pollution price on extracted Crown carbon could help slow the increase in Alberta sanctioned climate pollution. It could also provide many billions of dollars a year to help Albertans build a safe and sustainable economy instead. But let the record show that neither Premier Klein nor Premier Stelmach even tried. They could have. But they didn’t. Just saying.

Now it is Premier Redford’s turn to roll the dice. My advice is that if she is going to follow the “enable massive climate damage without doing anything to mitigate it” strategy of her predecessors that she should consider lawyering up.

So will it be just CEOs? Or will politicians also be held liable? Or maybe the distinction is moot as they seem to morphing to a hybrid species: 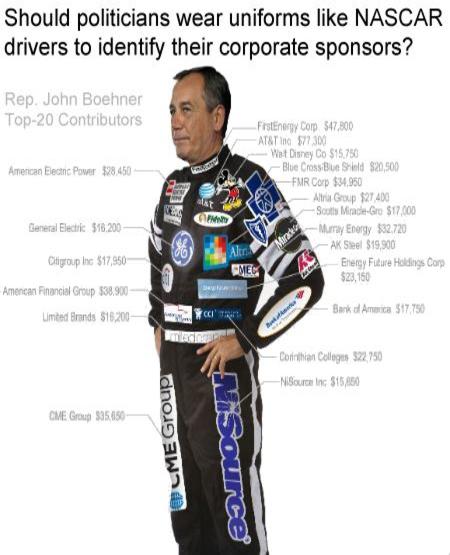 A current viral internet meme is whether politicians should have to wear the logos of the corporations that fund them. This extremely popular example is from Imgur.com.

Regardless of who gets indicted, Canada like the UK is one of the 118 nations of the International Criminal Court. This obligates our nation to co-operate with the court, including surrendering suspects.