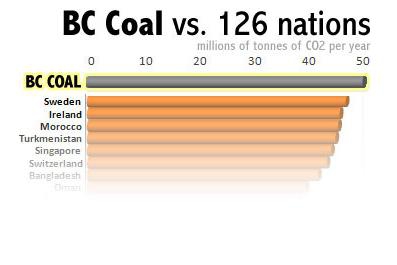 The twenty five million tonnes of coal dug out of British Columbia each year causes more climate pollution than the national economies of 126 countries.

Nations as large and diverse as Sweden, Ireland, Morocco, Bangladesh, Peru, Tanzania and Cambodia emit less CO2 than BC coal does each year.  In fact, there are 54 nations that, combined, emit less carbon pollution than BC coal. We are talking megatonnes of Big Carbon.

As reported last week, most of this climate destabilizing coal pollution gets shipped out of the biggest coal export terminal in North America – right here in Vancouver. In a multi-billion dollar giveaway to people outside BC, our government lets them buy our coal without paying any carbon pollution penalty.

Should we be exempting a climate pollution source dirtier than all the following national economies?