Which candidate for premier best represents BC citizens on climate? 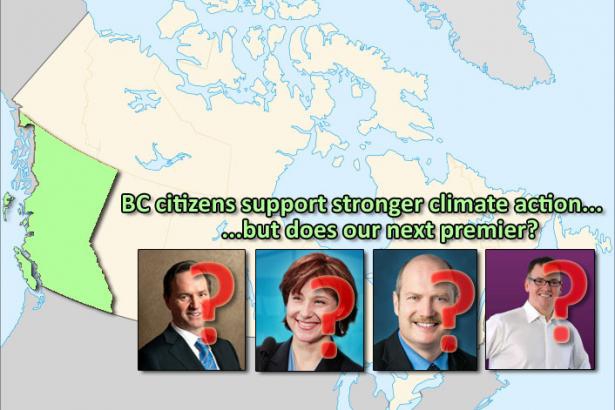 Saturday, BC Liberal party members choose our next premier. Four candidates remain. Into the fray drops a new poll showing some of these premier-wanna-bes are planning to take BC in the opposite direction that the majority of BC citizens say they want to go on climate. Here’s the scoop.

A new public opinion survey released Wednesday shows 84% of BC citizens and 80% of Canadians saying there is “solid evidence of global warming”. Overall 57% of all Canadians say the threat is “Very Serious.” And strong majorities in Canada support both “Cap and Trade” and “Carbon Tax” even if it cost them $50 a month. For comparison the BC Carbon Tax averages much less than $20 a month, all of which is returned to tax payers in tax cuts.

BC had the highest percentage of citizens saying government had ”a great deal of responsibility” for addressing the threat: 73%.

On the issue of their province acting alone, Canadians’ were strongly in favour: 70% agreed that “if the federal government fails to address the issue of global warming it is my province’s responsibility to address the problem.” Only 34% agreed that “my province should not adopt anti-global warming policies unless its neighbouring provinces also adopt similar policies.”

So we have large majorities saying global warming is a serious problem that has arrived. Large majorities want all levels of government to take action even if it means going alone. And solid majorities support both cap & trade as well as carbon taxes even to the tune of $600 a year, far higher than our Carbon Tax even if it was not all returned via tax cuts. So let’s see how that lines up with the climate plans of our four potential premiers.

After searching the candidates own websites mostly in vain I found an excellent resource page put together by the Conservation Voters of BC . This resource covers more than just climate change policy, so check it out if you want a broader view of the environmental stances of each candidate. Below is a snapshot of climate policy statements:

Did Gordon Campbell take the BC Liberals down with him when he fell?

It's Our Party, You Can Cry If You Want To, Liberals Tell VO

Why the B.C. Liberals could have used Dianne Watts