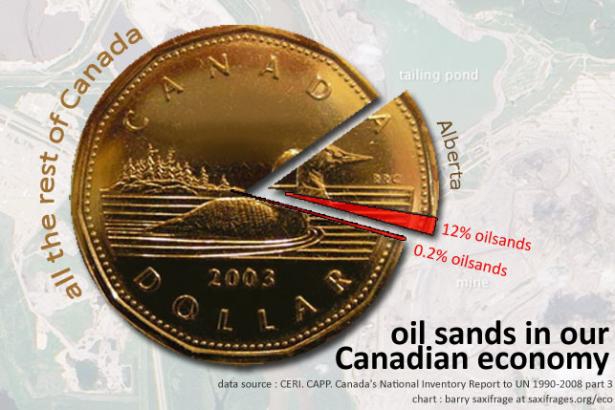 Proponents of the rapid expansion of the Alberta oil sands highlight the huge scale of the undertaking and the huge amount of money it brings to our Canadian economy. There is a growing mystique that the tar sands are so big and central to Canada's economy that, like it or not, we just can't afford to limit their growth.

Sure, the Alberta tar sands are a BIG undertaking. Then again, we are a nation that does lots of BIG things. Canada is a "can do" nation with a gigantic and varied economy. How big?

A SMALL SLICE OF THE MONEY PIE

The Canadian Energy Research Institute (CERI) says that the oil sands and oil sands-related activities accounted for 1.5% of Canadian GDP in 2000. They expect this to rise to perhaps 3.0% in 2020. For this article's charts and data I assumed 2% of GDP in 2008.

The Canadian Association of Petroleum Producers (CAPP) booklet "The Facts on Oil Sands" says that 90% of the economic benefit from oil sands stays in Alberta. CERI agrees. For Alberta that represents about 12% of their provincial GDP.

The 10% of tar sand dollars that leak out of Alberta add up to 0.2% of GDP for the rest of Canadians. As you can see, this amount is difficult to even see on a pie chart of the Canadian economy.

The fact that the tar sands contribute a small slice of our nation's GDP is, obviously, not a reason to limit their growth. But it highlights that they are not "too big" to put the brakes on should Canadians decide to address the problems the tar sands are creating. Canada can continue to thrive even if the tar sands don't keep expanding.

LESS THAN 1% OF JOBS

The Canadian economy bustles with 17 million employed workers. Many of these have multiple jobs. So the math seems to indicate that the tar sands contribute about one half of one percent of Canadian jobs.

Again, the fact that the tar sands contribute a small share of our nation's jobs is, obviously, not a reason to limit their growth. But again it highlights that they are not so big that we can not afford to pause their growth until they solve their oversized pollution problems.

One area where everyone seems to agree is that the climate destablizing pollution from the tar sands is BIG and growing.

Oil sand expansion proponents say this is tiny compared to other really, really BIG sources like USA coal burning...or everything else in the whole world. However they also admit that tar sands climate pollution has increased 42% in the last five years. Their plans call for tar sands total tonnes of GHG pollution to keep increasing, and for their percentage of the ever shrinking Canadian allotment of CO2 to keep increasing and increasing. They say they are so big and important to Canada that the rest of the economy needs to make way for them to gobble up more and more of our economy's ever shrinking pie of CO2 allocation.

But not to worry they say, because we are making our tar sands much "cleaner" in recent years. They say they are releasing less CO2 per barrel produced. That will help a little, right? Maybe. If it were true. Again the industry's own numbers seem to say it isn't.

A recent report by industry group CanOils, oddly headlined "Oil Sands Producers Cut CO2 Emissions," says "per barrel emissions remain higher than 5 years ago" and total CO2 emissions are "up 42.5% from 2004." Their own chart shows CO2 emissions per barrel, for both integrated and in situ, have risen around 20% in just the last five years.

Hmmm. Does 20% percent dirtier per barrel and 40% dirtier overall in just the last five years sound like "getting cleaner" to you?

COULD TAR SANDS BECOME A JOB-KILLING ROAD TO THE POOR HOUSE?

So why would Canadians consider halting the growth in the tar sands when they produce dollars and jobs for the Canadian economy? One reason might be that the tar sands produce very few Canadian jobs and very little Canadian wealth per tonne of climate pollution. They are economic underachivers per tonne of CO2.

Even Stephen Harper says our economy must be run on an ever decreasing number of tonnes of CO2 pollution. The health of our economy is going to depend on how many jobs and wealth we can squeeze out of every tonne of CO2 we spew. 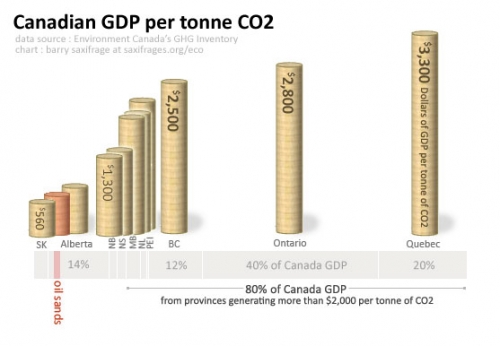 Similarly, the tar sands currently use up 5% of Canada's allotment of CO2 while generating 0.5% of jobs. That means the tar sands create 10 times fewer jobs per tonne than the Canadian economy as a whole.

But their own data suggests otherwise.

The reality seems to be that the tar sands are a small part of the economy that currently produces relatively few jobs and little money per tonne of CO2.

In a future of limited CO2, Canadians might reasonably decide to maximize the economy's wealth and job creation by limiting how much of the nation's CO2 allotment is given to such an anemic economic engine per tonne as the tar sands.