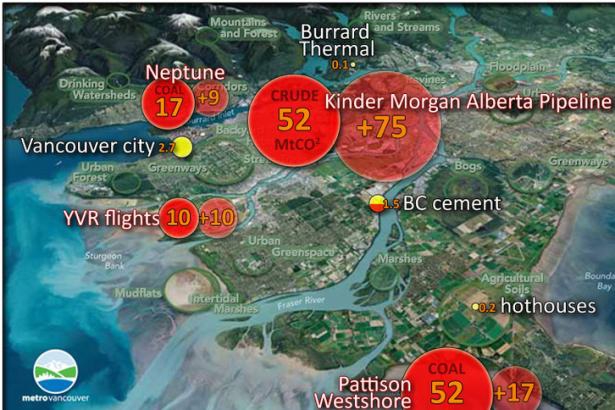 The efforts of Vancouverites and many others in our local area to cut climate pollution are being wiped out a hundred times over by a local handful of rogue carbon hot spots.

Our "World’s Greenest City" has pulled off a feat neither B.C. nor Canada has come close to yet -- it has reduced its climate emissions back down to 1990 levels. That is despite our population growing 27 per cent. Policies and targets are now heading in the direction that climate scientists and economists say is critical. Our city has a goal to cut carbon emissions another third by 2020. A wide range of policies have been created to try to make this happen and Vancouverites pay a carbon pollution tax on 92 per cent of our carbon emission.

These actions -- setting declining carbon targets, creating policies to meet those targets, and paying for climate damages -- are exactly what are required of everyone if we want to build a hopeful and safe climate future for ourselves and our children.

In marked contrast, however, the Greater Vancouver area is being flooded by several gigantic, uncontrolled and rapidly expanding flows of carbon. All of Vancouverites’ efforts to reduce climate emissions in the next decade will be wiped out one hundred times over if these local out-of-control carbon flows are allowed to expand as planned.

These carbon rogues have no plans to reduce the growing climate damages from all this carbon at any point in the future. All evade paying for their share of the climate damage from which they are profiting.

As this series will make clear, the difference between climate pollution being under control vs. exploding recklessly hinges on whether the carbon has to pay for the climate damage it does to other humans. This "100-mile carbon" series will explore the histories, controversies and solutions for eight of the biggest climate pollution hot spots in our area. Each week, we will profile one hot spot.

Today’s introductory article will start with a quick overview of all eight, then summarize the growing human costs of carbon pollution, and end with a 100-mile carbon report card.

These four hot spots currently pay the B.C. Carbon Tax for much, or all, of their climate emissions. While the carbon from these four gets most of the focus from our media and governments, they are the smallest of the eight hot spots. None have business models that require rapidly increasing climate pollution. Together these four "under control" hot spots account for about five million tonnes of CO2.

However, two of these groups -- local cement manufacturers and local hothouse growers -- are lobbying the provincial Liberal government to get a special exemption from having to pay our B.C. Carbon Tax. Will Premier Christy Clark start carving holes in the carbon tax for those who don’t want to pay it? What will happen to these industries if she doesn’t? What other B.C. sources of climate damages are we exempting already?

The truly dangerous aspect of these four, however, is that they plan to radically increase -- by a combined 100 million tonnes of CO2 -- the climate damages they profit from. The scale of their plans to increase climate pollution will overwhelm all planned climate pollution reduction efforts by everyone else in all of B.C.

Let’s look quickly at just one: Kinder Morgan’s Trans Mountain pipeline expansion. This project alone requires pumping more new climate pollution into our already destabilized climate than BC citizens would save if we took every car and truck off the road, turned the heat off in every building and shut down all of our industry.

In other words, there is nothing the citizens of B.C. could possibly do to cut our fossil fuel burning enough to make up for the increased climate damages caused by the expansion plans on just this one pipeline.

These four climate damage rogues are intentionally pursuing a profit roadmap to climate "catastrophe" that will wipe out -- many times over -- all of BC citizens’ efforts to create a safe, sustainable world for our children.

Humanity is clearly at a dangerous tipping point with our climate system. Warning bells are ringing from some of the most staid and conservative institutions on the planet saying we must stop expanding fossil fuel infrastructure as soon as possible:

"On planned policies, rising fossil energy use will lead to irreversible and potentially catastrophic climate change. The world is perfectly on track for a six-degree Celsius increase in temperature. Everybody, even the schoolchildren, knows this is a catastrophe for all of us." -- International Energy Agency’s (IEA) World Energy Outlook report.

“World headed for irreversible climate change in five years, IEA warns. If fossil fuel infrastructure is not rapidly changed, the world will 'lose for ever' the chance to avoid dangerous climate change" -- UK Guardian on IEA report

"Rapid and massive" action needed to cut carbon emissions or face 5.5 C warming this century.  "There’s no way the world can or should take these risks." -- Massachusetts Institute of Technology (MIT) study

"The dangerous level of global warming is less than what we thought a few years ago … It was natural to think that a few degrees wasn’t so bad ... (But) a target of two degrees is actually a prescription for long-term disaster." -- James Hansen, the world’s most important climate scientist and director of NASA Goddard Institute for Space Studies.

We must “substantially reduce greenhouse gas emissions” because “many of these changes will persist for hundreds or even thousands of years.”-- U.S. National Academy of Sciences

"For us in Africa, climate change is a life and death issue. By dramatically increasing Canada’s global warming pollution … exposes millions of Africans to more devastating drought and famine today and in the years to come. It’s time to draw the line. We call on Canada to change course…" -- Archbishop Desmond Tutu, Kumi Naidoo and other African leaders

"U.S. sets record with a dozen billion-dollar weather disasters in one year… What we are seeing this year is not just an anomalous year, but a harbinger of things to come" because of fossil fuelled climate destabilization -- The U.S. National Oceanic and Atmospheric Administration

"The only plausible explanation for the rise in weather-related catastrophes is climate change." -- Munich Re, one of the world’s leading reinsurers

"In the last year, extreme weather events shocked global markets contributing to soaring wheat prices and imperiling food security in many parts of the world … helped push tens of millions of people into hunger and poverty … a grim foretaste of what is to come as new warnings from the International Panel on Climate Change (IPCC) show extreme weather events are likely to increase in frequency and severity without action to tackle climate change." – Oxfam hunger report

It is hard to imagine getting any clearer warnings that continued expansion of climate-dirty coal, oil and natural gas infrastructure is bringing real harm to our us and our children.

In addition, like tobacco companies before them, by refusing to pay for their dangerous emissions along the way, they may face huge liability judgements later. By refusing to make carbon pay for its damages we are inflating a gigantic carbon bubble in our economy.

Every tonne of carbon pollution now inflicts an economic cost on human society.

Estimates of this Social Cost of Carbon (SCC) by economists around the world range widely, but the mean value from hundreds of studies worked out to $29 per tonne of CO2.