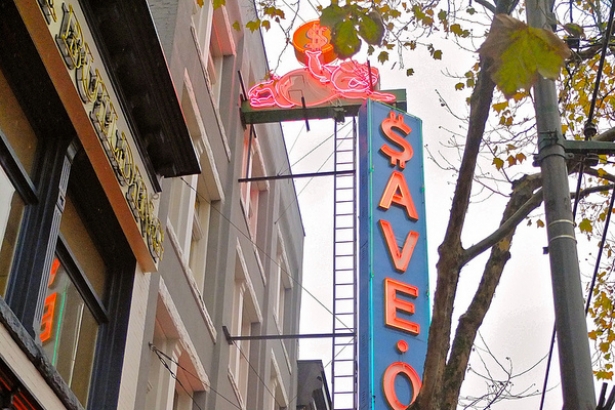 Creative Commons photo of Save On Meats by Rick Chung (www.rickchung.com)

With the recent frenzy that has been set off in the wake of Downtown Eastside restaurant Pidgin opening just weeks ago, and a Local Area Planning Process currently unfolding in this part of the city, it seems an opportune moment to reflect on the past decade of social housing activism in Vancouver and question why activists would choose to spend so much time vilifying restaurant owners.

The question will be explored this Thursday, March 7, at SFU City Conversations, through an interactive panel discussion at Harbour Centre. For anyone interested in these recent developments this free event from 12:30pm to 1:30 pm may be worth attending.

In the meantime, let’s take a look at some recent history.

For decades now the Downtown Eastside (DTES) has lacked a cohesive area plan that bridges housing, health and well-being, the local economy and other interconnected issues. Last year, after nearly a year of negotiating the Terms of Reference for the co-chairs, this long-needed plan began to come together in partnership with a number of community organizations.

This included local activists, residents, business improvement associations, employment services providers, arts and culture groups and other stakeholders. At the same time, with some of the most affordable land in close proximity to the central business district, the DTES has become one of the most attractive areas of Vancouver to invest in. Activists have reacted strongly in retaliation with many of the same tactics they’ve employed for years: try to halt market forces (at least mainstream market forces) intimidate local businesses (or “educate” them, and by making an example of them educate the public too), and demand social housing at welfare rate. While I empathize with their concerns, it may be time to try a new strategy.

Numerous levels of government have already purchased buildings in the area including 1,522 non-market SRO units since 2006. According to the Provincial Government’s 2010 report, Housing Achievements in British Columbia $30 million dollars per year are spent managing social housing in the DTES, and just recently the group Habitat Housing Initiative were awarded an RFP for over $100 million dollars worth of improvements to 13 DTES SRO buildings.

Our elected leaders and many of these same activists worked with local developer Westbank to turn a dilapidated Woodwards into hundreds of units of social housing, housing that was needed, housing that was demanded. Now the activists decry the creation of Woodwards as an experiment in social cleansing. The solution is apparently the problem according to the recent CCAP Hotel Survey & Housing Report, which suggests that despite all this government investment in the DTES the area is worse off than before.

Missed opportunities and the wedge between poor and middle-class

Over the past decade as residents have been pitted against residents and activists against businesses opportunities have been missed. An opportunity to work with businesses and philanthropic organizations to form a land trust when property values were lower has been missed. The chance to create a community development corporation when land values were lower has been missed. While some have been advocating that we still look at these options it is far less feasible to do these and other things now than it would've been ten to fifteen years ago.

The wedge that has been forced between the most vulnerable low-income residents and the working poor, the middle-class and the small business owners has only served to keep the status quo in place long enough to see the DTES become an irresistible opportunity for developers. How we as a community manage this and engage this process to ensure protection and opportunity for the vulnerable is now of paramount importance. We do need to protect housing, services and affordable business spaces to serve low-income residents. I don't know how anyone can put forth a moral or logical argument to the contrary. The arguments will mostly be about how we do this, and many of them will no doubt take place through the Local Area Planning Committee's work.