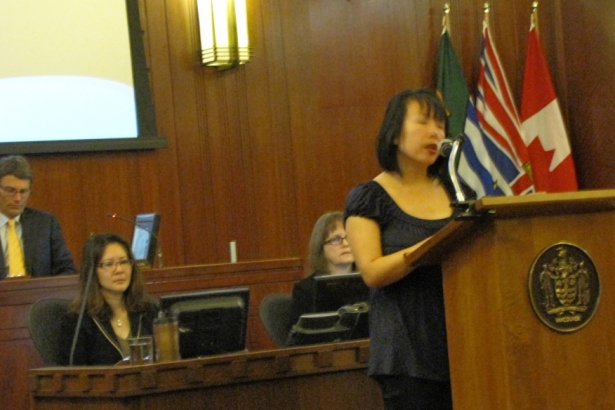 The regular Vancouver city council meeting of Tuesday, April 9, 2013 came to order at 9:36am.

Councillor Tony Tang gave the welcome and read a poem by A.E. Housman about cherry blossoms. He prefaced his reading be saying, “Of course, knowing that there are poets among us today in the chamber, I hope I don’t embarrass myself. After all, I’m just an engineer.”

Mayor Gregor Robertson gave condolences for Art Phillips, a former mayor of Vancouver, whose policies helped shaped Vancouver as we know it today. Council showed a photo slideshow of Phillips and observed a moment of silence.

The second was “Capital Grant to Immigrant Services Society of BC for a Housing Development of 26 units (with 98 lockable rooms) at 2610 Victoria Drive.” The report recommends that council approve a grant of $490,000 for Immigrant Services Society of BC so that it can build a transitional supportive housing project with “98 flexible, lockable rooms which can be combined in a variety of configurations, down to 26 ‘self-contained units.’”

The strategy focuses on nine priorities:

Councillor Andrea Reimer thanked staff for the report and asked what the digital service governance would look like.

Councillor Tim Stevenson had been sitting with his leg up throughout the meeting because of an apparent injury. Mayor Robertson invited him to stay seated while he spoke, but he chose to stand instead.

Stevenson asked about how to move forward when not everyone knows how to use new technology. He was specifically concerned with seniors, who don’t necessarily have access to tech help.

Councillor Kerry Jang laughed while Stevenson was describing his own problems with technology, which led Stevenson to jest, “Councillor Jang laughs at all of this, but he’s moving rapidly to the senior point himself.”

Jang jokingly called a point of order to say he was nowhere near Stevenson’s age.

Councillor Adriane Carr began her time with a suggestion to Stevenson: “In order to cope with your—sort of—digital inadequacies, may I suggest you drop into a Vancouver public library. They’re very good about helping people like you.” She then confirmed with staff that digital services would not be replacing face-to-face customer services, but adding to it, and asked about the strategy for determining Wi-Fi placement.

Councillor Elizabeth Ball echoed Stevenson’s concerns about those who are not as technically apt; she was especially concerned about communicating with older users who may not understand technical jargon. Ball also asked about access to digital resources for the disabled.

Mayor Robertson asked about the importance of competing with other cities to attract digital companies. He also asked when council can expect the city’s website to be available on mobile and when it can expect the 3-1-1 mobile app.