Vancouver city council gets report card on housing and homelessness 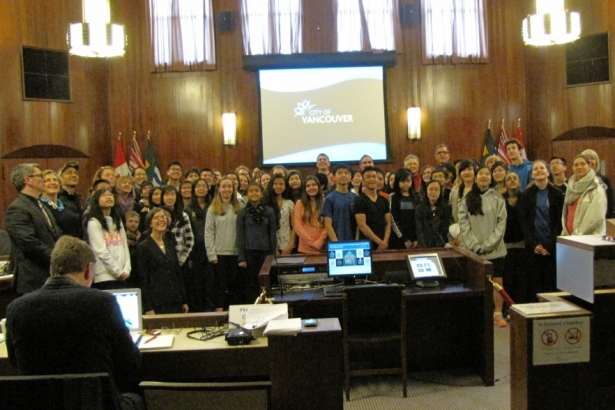 The regular meeting of the Vancouver city council meeting on February 12, 2013 came to order at 9:40am.

Councillor Tim Stevenson gave the welcome. He outlined the history of Chinese-Canadians and wished everyone a happy Lunar New Year.

After an upbeat (and accidental) musical introduction, Mayor Gregor Robertson proclaimed February 10-17, 2013 Lunar New Year week in Vancouver.  He presented the proclamation to representatives of the city’s Chinese cultural community.

Council agreed to meet “In Camera” later in the day, and Mayor Robertson announced the appointments that council had made during the last “In Camera” meeting on January 29, 2013. Council appointed Kim Maust to the Development Permit Board Advisory Panel, Michael Kluckner to the First Shaughnessy Advisory Panel, Phil Mondor to the Urban Design Panel, Alan Davies to the Gastown Historic Area Planning Committee and Goran Ostojic to the Urban Design Panel.

Once the committee of the whole had been formed, Councillor Adriane Carr called a point of order to say that her motion to have staff look into community centre association finances had not been included on the agenda, but Mayor Robertson responded by saying that the motion had not been included because it was out of order. He told Carr that she could move it later as a notice of motion. Carr argued with Robertson over the decision.

There were 3 items adopted on consent. The first was “Proposed Closure of Portions of Kingsway and Commercial Street Adjacent to 4338 Commercial Street.” Part of the condo development at 4338 Commercial Street is encroaching on the road, so staff recommended that council close those portions of the road and charge the owner of the building a fee for the granting of an easement (the right to use the city’s property), as well as an annual fee for encroachment.

The next item adopted on consent was “CD-1 Rezoning – 4533-4591 Cambie Street and 510 West 29th Avenue.” Ramsay Worden Architects has applied on behalf of Intergulf Development Corp to rezone 4533-4591 Cambie Street and 510 West 29th Avenue from a residential district (RS-1) to a comprehensive development district. The rezoning is to allow for the development of three six-storey buildings, containing 175 living units. The report passed by council recommended that the application be sent to a public hearing.

“CD-1 Rezoning: 6361-6385 Cambie Street” was the final item adopted on consent. GBL Architects has applied on behalf of Wanson (Oakridge) Development Ltd. to rezone 6361-6385 Cambie Street from a residential district (RT-1) to a comprehensive development district. The rezoning is to allow for the development of an eight-story building with 63 living units and commercial space on the main floor. The report recommends that the application be refereed to a public hearing.