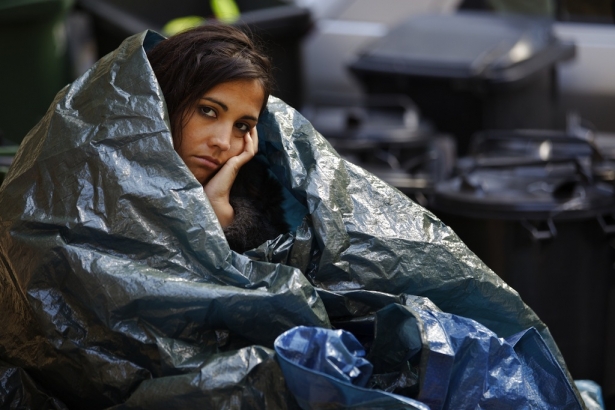 A figure combs the alley of an underlit neighbourhood for bottles, spare change for a burger and retires in the safety of the night, in a warm spot on the sidewalk. This unfortunate scene brings the feeling of heartbreak and, sometimes, fear in Vancouver.

"There is no excuse for anyone to sleep outside at night," Mayor Gregor Robertson, stated in a press release released today by the City of Vancouver.

And according to preliminary numbers from the City of Vancouver's homeless count, the number of people sleeping outside at night is thankfully declining.

Here's what the press release said:

This year’s count, which took place over a 24 hour period on March 13, 2013 found 273 people sleeping outside in Vancouver, which is:

“The drop in people sleeping outside in Vancouver shows that we’re on the right path when it comes to ending street homelessness by 2015,” said Mayor Gregor Robertson. “Our efforts are working, but there is no question there is more work to do. This is within our grasp.

“Affordable housing and homelessness is an issue not just for Vancouver, but for all of Metro and the Province. I urge the provincial parties to outline their plan for preventing and ending homelessness. In a province as wealthy and innovative as BC, there is no excuse for anyone to sleep outside at night.

“We need a stable and reliable Provincial commitment that full shelter funding will be made permanent, as well as the investments required to meet the urgent need for new social and supportive housing – these are responsibilities of the Provincial Government,” added the Mayor.

The City’s 2012-2021 Housing and Homelessness strategy requires the addition of 290 units of new supportive housing each year until 2021, and 500 new units of social housing.

A full report on the homeless count, including demographics, as well as the street and sheltered homeless numbers, will be presented to Council in July. Preliminary results show there were 1,288 shelter beds available in Vancouver on the night of the count. The City, in conjunction with its partners at BC Housing and other service providers, are still analyzing the homeless count data to determine an accurate shelter occupancy figure.