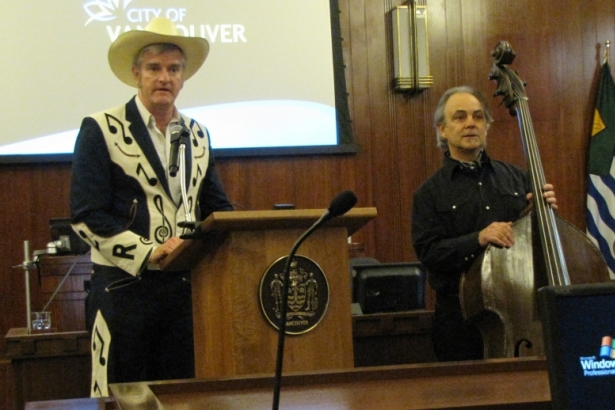 International Day for the Elimination of Racial Discrimination

Mayor Robertson proclaimed March 21, 2013 the International Day for the Elimination of Racial Discrimination in Vancouver. He invited Demitri Douzenis, co-chair of the Multicultural Advisory Committee, to accept the proclamation.

There were special condolences for Stompin’ Tom Connors, the iconic Canadian singer-songwriter who died last week, and local musicians Rusty Ford and Michel Drouin performed “The Bridge Came Tumbling Down.”

There were four administrative and three policy reports adopted on consent.

The first administrative report adopted on consent was “Federation of Canadian Municipalities (FCM), Union of British Columbia Municipalities (UBCM) and Lower Mainland Local Government Association (LMLGA) Membership Fees for 2013-2014.” It requested that council approve membership fees for the FCM, the UBCM and the LMLGA, totaling approximately $136,006.87. It also requested that council approve an additional $10,561.29 for an optional contribution to the FCM’s “BC’s Travel Fund.” (If you’d like more information about these organizations, check out page 2 of the report.)

The third report adopted on consent was “Request to Travel – 2013 Lower Mainland Local Government Association (LMLGA) AGM and Conference.” The report asked that councillors Carr, Deal, Louie, Reimer and Tang be allowed to attend the LMLGA AGM and Conference from May 8-10 at the Harrison Hot Springs in BC. The estimated expenses for councillors Carr, Deal, Louie and Tang are $3489.92, while Metro Vancouver will fund Councillor Louie’s expenses.

“Childcare Facility at 1372 Seymour St: Sublease Terms and Grants to Vancouver Society of Children’s Centres” was the final administrative report adopted on consent. It recommended that council approve entering into a sublease agreement with the Vancouver Society of Children’s Centres, and that council grant the VSCC a one-time start-up grant of up to $74,000, as well as an annual operations grant of up to $19,800 per year.

The first policy report adopted on consent was “CD-1 Text Amendment: 749 West 33rd Avenue (St. Vincent's Site) (John Paul II Pastoral Centre).”Catholic Charities of the Archdiocese of Vancouver have applied to amend the text of the CD-1 zoning for 749 West 33rd Avenue, so that a six-story pastoral centre, including housing for the clergy, can be built. The report recommended that this application be referred to a public hearing.

“CD-1 Rezoning: 2220 Kingsway” was the next report adopted on consent. Henrique Partners Architects have applied, on behalf of 2220 Kingsway Property Inc., to rezone 2220 Kingsway from a commercial district (C-2) to a comprehensive development district (CD-1). The rezoning would allow for the development of a 14-story mixed residential building. The report recommended that the application be referred to a public hearing.