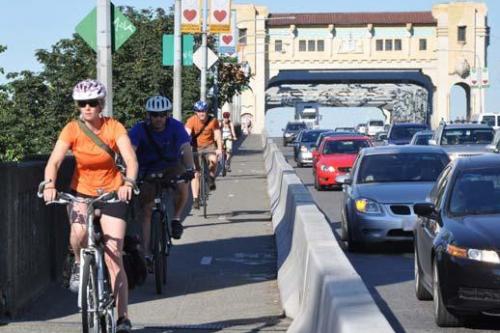 The City of Vancouver invites public input on the development of a separated bike lane in the Downtown core to connect existing lanes and provide greater separation between cyclists and vehicles.

Under the proposed plan, a separated bike lane on Hornby Street would connect the existing Burrard Bridge and Dunsmuir Street separated bike lanes and also connect with the seawalls in Coal Harbour and off Beach Ave. on the English Bay end.

An information session will be held on Wednesday, Aug. 11 between 11 am and 7 pm in the rotunda of the Pacific Centre Mall at Howe and Georgia streets. City of Vancouver staff will be on site to provide information, offer survey cards and receive feedback from the public.

Surveys will also be mailed to businesses and residents along Hornby to solicit feedback.  For more information on the proposed plan, visit Cycling - City of Vancouver. To fill out a survey on the proposed bike route visit Vancouver.ca/hornbysurvey

The consultation runs from now until mid-September.

When considering which street to implement a north-south separated bike lane, City staff evaluated factors like safety, truck and transit use, existing bike routes and use, traffic flows as well as the presence of on-street parking and loading zones. Staff evaluated Burrard, Thurlow, and Hornby streets.

Hornby Street is the preferred option for a cross-town separated bike lane because:

The consultation for the route comes amidst significant growth in the use of the new separated bike lane on Dunsmuir and the Burrard Bridge milestone of one million cyclists across the bridge on July 7, just six days short of the bike lane’s one-year anniversary.

Counters also show 2000 cyclists are using the Dunsmuir lane each day, up from 500 a few months ago, a 250 per cent increase.

About 30,000 bike trips a week are being made across the Burrard Bridge this summer.

The City is committed to becoming the greenest city in the world by 2020 and bike lanes are an important way to help reach that goal. The increased use of separated bike lanes shows cyclists prefer a protective barrier between vehicles and cycling traffic.

As more people get out of their cars and onto a bike or walk, the city will enjoy improved air quality, less traffic congestion and reduced greenhouse gases.

On Tuesday, Vancouver city council voted to refer the Regional Context Statement Development Plan to a public hearing on June 11th. Following the public hearing, council will vote again on whether or...
Chelsea NovakApr 24th, 2013
Speak up about this article on Facebook or Twitter. Do this by liking Vancouver Observer on Facebook or following us @Vanobserver on Twitter. We'd love to hear from you.

At a Bike to Work Week station, cycling maps, free tune-ups, and a host of reasons to commute on two wheels