Time for Harper to come clean on treaties 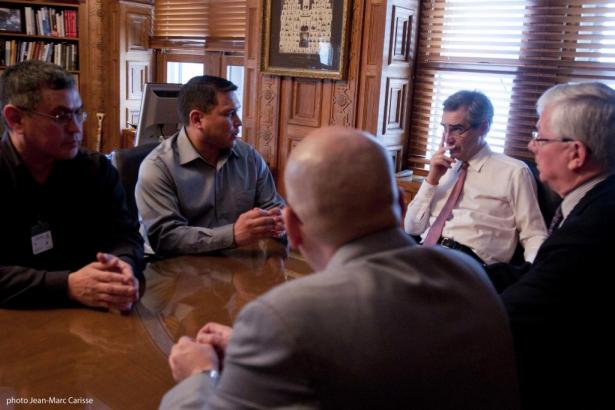 The contortions by John Weston, Conservative MP for West Vancouver-Sunshine Coast-Sea to Sky Country, and the entire Harper government, on the question of the unprecedented delay in initialing the Sliammon treaty, have been spellbinding.

So what are the Sliammon people and City of Powell River, and regional district to make of these flagrant contradictions?

Here’s how Clint Williams, Chief of the Sliammon First Nation see’s it: “We are absolutely appalled and stunned that our own MP, John Weston, has not been a strong supporter for moving this matter forward.  We are truly shocked and speechless.”

The Sliammon’s chief negotiator, Roy Francis, observed, “After many months of silence from Ottawa, we met with Mr. Weston seeking his support to encourage the government of Canada to initial the Final Agreement.  Instead, he expressed concern about provisions in the treaty where Sliammon Laws prevail over federal and provincial laws, he further explained that the constitution of Canada does not contemplate law making authorities for First Nations Governments.  I believe the concern he expresses completely undermines the notion of tripartite negotiations, and I’m concerned that a very hard fought and expensive negotiation is at risk of being lost.  We need the government of Canada to honor its mandates, its place at the table, and to be true to its word.”

Powell River’s City Council adopted unanimous motions condemning the Harper government for its delays. Mayor Stewart Alsgard joined Chief Williams in expressing his frustration.  “We are all terribly disappointed and frankly perplexed, at the unnecessary delay in proceeding with this Treaty” stated Alsgard.

Roy Francis asked Weston where the hold up was, but Weston didn’t answer the question. Weston also stated he has not slowed down the treaty process, “but have done my best to get the treaty right. I’ve made the treaty a priority and, whenever asked, responded quickly. In other words, I’m trying to protect the Treaty while moving it along, as quickly as possible.”

Weston said that, despite the support of all parties, including the province, “The initialing hasn’t taken place because at the federal level there’s this internal federal review which takes into account all the issues we’ve discussed and more,” he said.

“I’m not part of that internal federal review. It’s a cabinet process and my participation in that is from the outside.”

In contrast, for three other treaties which have been ratified, Tsawwassen First Nation, Maa-nulth First Nations and most recently Yale First Nation, it took only two months for Ottawa to sign off on the negotiators’ agreement.

Troubling questions remain about the role of JohnWeston in this entire affair and the competence of the Harper Government incarrying out its own policy.

According to the excellent reporting of the Powell River Peak Mr. Weston confirmed that he met last summer with people in Stephen Harper’s office to discuss the treaty. Yet, Weston says that he has never read the treaty. It is fair to therefore ask what they were discussing, and what Mr. Weston’s role was in that discussion.

We should also understand how Mr. Weston would not have read the treaty when Powell River mayor and council did and were completely aware of the substance of it.

Mr. Weston is also quoted as saying that he has been working hard to make “the treaty better”.  But how can he make it better if he didn’t read it?

He says that the delay was caused by a “federal review” involving some cabinet ministers. Can he explain what the nature of this “review” is, who is involved, and who initiated it?

Is this a new “review” process that no one is aware of? Why was this treaty under “review” when the others before it were not subjected to one?

Mr. Weston often cites “constitutional concerns”. What are they, precisely, and what role have they played in this delay? Does the Harper regime share those “concerns”?

Does this mark a policy departure from the HarperConservatives’ expressed support of the treaty process? If so, what are the implications for the other 50 treaties being negotiated in BC?

The Sliammon people and citizens of Powell River are only asking for straight answers to basic questions. To date, Mr. Weston – their MP - has not provided them.

It’s time for Weston to stop the spinning, contradictions, and flip-flops. The Sliammon people deserve better than this. Weston and the Harper government must come clean.

Why does it feel that this is always way too much to ask of them, when it is the very least they can do?