The remarkable life of Donald Brenner 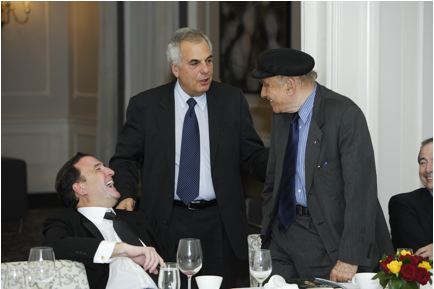 We lost a great public servant, a strong patriot, and an extraordinary human being this weekend. Donald Brenner, former B.C. Chief Justice of the Supreme Court, unexpectedly passed away at the young age of 64.

In 2001, I met Don when George S. Petty, my dear friend and late partner, and I bought the former Skeena Cellulose Inc. (SCI) out of bankruptcy protection from the B.C. government. Brenner was the presiding judge over the insolvency process.

The new Gordon Campbell government promised that it would privatize Skeena. It engaged the investment-banking arm of Raymond James to drum up some interest in the business. Their marketing efforts took them all over the world. There were no takers. None, that is, except for George and me. We saw in this carcass the possibility to reshape a company and, by extension, re-write the rules of a dying industry in Canada.

Skeena was widely perceived as a lost cause, with good reason. The company was the major employer in Northwestern B.C., from Smithers to Prince Rupert, and many points in between. SCI was known as a pulp company because of the large mill it operated in Prince Rupert. But the company also owned four large sawmills, a whole log chipper, and had 1.4 million cubic meters of forest under management.

At its peak, Skeena employed 3,500 people directly, and about 10,000 indirectly.  It was located on the traditional territory of many First Nations, each with their own distinct values, customs, cultures, and expectations.

Despite huge and quite understandable pressure from a major creditor, the Toronto Dominion Bank, Brenner was adamant that as long as there remained a viable alternative to permanent closure, he would support it.

Petty and I decided we would give it a shot. And we sure did.

We came painfully close to securing the funding needed to modernize and start operations. Yet, in the aftermath of 9/11 and other market shocks, we couldn’t raise the $100 million needed to restart the business.

The journey was a long and tumultuous one, but at the end of the day, most people involved played a very positive and constructive role. Many worked hard to breathe new life into a company left for dead by taking a leap of faith, putting their lives on hold and praying that we would succeed.

We didn’t. And that spelled the end of the dream that became known as New Skeena Forest Products. Excuses are easy. In the final analysis, I was the chief executive officer and the failure to execute was mine. But the fallout was wide and deep.

There’s an old adage that success has a thousand fathers but failure is an orphan. I never felt that so acutely than during that lonely walk to the law courts in September 2004. That morning, I assigned New Skeena into bankruptcy for the last time.

Don Brenner was once again the presiding judge. I’ve never forgotten the look on his face. He wasn’t the slightest bit happy to see me there. If looks could kill...

He had pinned his hopes on our ability to do what others either would not or could not do. I was already feeling terrible about not succeeding, but I remember how much worse I felt because I had let him down.

The late Douglas Knowles, another dear friend, was acting for us as insolvency counsel in what became known in legal circles as “Skeena III” – shorthand for the third time in bankruptcy court. He was the managing partner at Fraser Milner Casgrain and a friend of Brenner. Doug promised that when the case was over he would arrange a lunch between Don and I.

In 2006, Brenner and I sat down for a long lunch at Le Crocodile, one of Doug’s favourite lunch spots. It turns out that Don Brenner wanted to meet me as much as I wanted to meet him. Brenner wanted to tell me how much he respected our efforts, and admired how we had attracted exceptional talent and recreated a business model. He was also impressed by how we fought to change the mindsets and attitudes in a company that was destined to die without them.

He said he was rooting for us as we dealt with the many entrenched obstacles that needed to be overcome along the way. For Don, there were too many lives at stake, and too high a price to pay to B.C.’s economy to not pray for our success.

Don talked to me about his career as an airline pilot, his love of the law, and the wealth of learning he had undergone on the bench. He speculated on what he might do after leaving the bench, telling Doug and I that he did not plan to retire there. “I don’t know what it is yet, by I still have another career in me,” he said.

We saw each other a lot more after that, often walking our Labrador dogs together. Don would occasionally attend intimate lunch conversations I would organize for friends.

Don was a class act in every way. He was a distinguished man with a wonderful sense of humour. He exuded a sense of competence and confidence, and profound inner strength.

Justice Brenner commanded wide respect through his fairness, common sense, and vast knowledge. His judgments were always packed with wisdom. The sharpness of his astonishingly formidable intellect was always apparent in his decisions, as well as the questions he posed of counsel before him.

Don was highly respected as a jurist, not only in B.C., but also across Canada. He was a member of the panel -- along with former Supreme Court of Canada justices Frank Iacobucci and Claire L’Heureux-Dubé -- that was vetting thousands of secret documents at the center of the detainee torture allegations in Afghanistan.

Canada and British Columbia have been blessed that Don Brenner chose to serve. Service meant a great deal to him. Not for the adulation, but for the deep love of his province and country.

His public service has left our court system in much better shape than how he had found it. By setting the bar as high as he did, Don inspired countless lawyers to be better than they thought they could be.

And he inspired this citizen to be better, too, and to aim higher. He shall be sorely missed. Our country owes him a debt of gratitude.