We now return to your regularly scheduled programming. The Vancouver Canucks—carrying their usual, cocksure swirl of complete unpredictability—are back playing games into May. Questions of Roberto Luongo’s mental acuity abound, and we don’t know which goaltender will start Game 1.

Has it really been a whole year? Has anything changed? Where are we?

We recall last April, when this team limped into the playoffs with no time or any bother for the regular season, and hardly much more for the lowly first round. The Stanley Cup (Final) hangover was real and it drained the city and the team of any emotion for anything that wasn’t the real fix: Conference Semi’s and onward. It was an interesting tactical approach—to apparently not give a damn, even when heading into the playoffs—and in hindsight the results were unsurprising.

The team was without Daniel Sedin, but it was also without legs, and they got steamrolled for it by a Kings club which was hungry. Not even hungrier, just hungry period.

So, now it’s a year later. Has anything changed?

Advanced statistics have a lot of legitimate answers, and with regard to the Canucks they’re generally very positive, but there’s no getting around that this team routinely fails the far less advanced “eyeball test”: They often look terrible, yet often squeak out wins.

So what exactly is this team? Does anyone know what they’re actually capable of?

Maybe it’s the one which has stepped up to dominate and manhandle the Kings and the Blackhawks at various times this season. Or it could be the one which Double Speaks its way out of embarrassing losses to conference bottom-feeders by claiming afterward that they were the better team and that the process was generally positive.

Is this truly a team with great possession numbers? Or are those stats inflated by pounding on weak divisional opponents, lapsing into soft peripheral play with harmless peripheral shots for large stretches of the season, and accumulating more misfires from the blueline than there are unforced Alex Edler giveaways per period?

Perhaps it’s a team that won anywhere between 8-10 games which it had no business winning, had it not been for goaltender Cory Schneider and his bottomless bag of eye-popping “I got this” performances.

Where would this team be without those 16-20 additional points? Sure, we could expect that Luongo might have picked up the same wins, but would that be fair? Is it fair to expect any goaltender to win some of the games which Cory Schneider managed to this season?

At least the skaters will be well rested, given how many games they took off while throwing their goaltenders to the wolves.

Perhaps this is all being too critical. The Canucks, as they’re currently constructed, should be a formidable force in the first round and beyond. They have experience, an all-star core, depth, and as a group they’ve battled extreme adversity numerous times over the past several seasons.

But this is also a team which is prone to astoundingly apathetic play, and which too often appears to assume victory will follow simply because it correlates with an expected outcome. Can anyone argue otherwise? That they’ve managed an impressive record and divisional championship with serious injuries and routinely lackluster play speaks to their talent. But finding success and simply “getting by” with less-than-full efforts is not the mentality with which to approach the NHL post-season.

It is, then, poetic that they’re facing off against the equally infuriating and perennially disappointing San Jose Sharks. The culture change has already started there, and after a decade or so of being considered a generally elite team with annual Cup contender status the Sharks are now—finally—swaying on their last few death spasms. Win now, or be fully drawn and quartered in the off-season.

The Canucks will fare no better. The scapegoating should they find themselves on the wrong side of four wins will be fierce. The only real question is which two teams will show up for the majority of games in this series, because there appear to be at least four of them—the best and worst of each Jekyll and Hyde club.

If there’s a word which summarizes the Mike Gillis and Laurence Gilman philosophical approach to running a sports franchise it would be this: Control. Not in the sense of micromanagement or outright...
Alan O'SullivanApr 4th, 2013 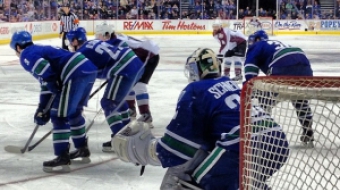 Canucks' stubborn disrespect of the shootout impossible to make sense of