Last week I was asked by VO Food Editor Paul Voykin for permission to repost my recipe for Va-va-voom Vegan Chocolate Peppermint Truffles in an article about the SPCA's upcoming Pawsitively Sweet Vegan Bake Sale at Radha Yoga and Eatery. Of course I was thrilled and flattered, and it occurred to me that participating might be a fun idea. Helping to raise funds for puppies, kittens, bunnies and more at one of my favourite restaurants? Why not?

Vegan baking is a huge draw for Vancouverites, as was evident from the long, steady lineups for goodies at the bake sale. An impressive crowd of people turned out to enjoy the talents of Vancouver's vegan baking community, whether as a show of support for the SPCA, or just to indulge in delicious, animal-conscious sweets.

I spoke briefly with a few of the organizers, and I also know Radha head Chef Andrea Potter and former Radha Chef Robert Wilson-Smith. This latest bake sale has been their fourth event in two years, and they were very pleased with its success.

Some fantastic items that I got to taste were the raspberry-lime "cheesecake", the vanilla and chocolate "cheesecake" squares, chocolate ganache-covered cake balls, coffee and chocolate-covered doughnuts with chocolate filling, and chocolate-mint silk pie. They were all excellent, but the silk pie stood out as my favourite. The texture of its mousse was dreamily fluffy, so much so that, when someone held up the line, I jumped ahead to grab a slice before it could sell out.

I like Radha very much, having hosted my birthday dinner there last year (after checking with friends and family if they'd be alright with trying a vegan dinner, of course). The building's mixed-use yoga/food class/restaurant space, retrofitted with an energy-efficient lighting system, is welcoming and comfortable. Happily, it lacks the judgmental atmosphere that some vegan restaurants exhibit, which can guilt non-vegans into staying away.

I was happy to join in on the bake sale, but first I had to tweak my truffle recipe so that it would satisfy even the strictest level-5 vegans. I changed the possible allergens in the original recipe (coconut, peanuts) to peanuts/nuts and soy (my almond milk contained soy lecithin), because it seems like more people are allergic to coconut than to soy.

I also used agave syrup as a sweetener instead of the original white sugar. This made the truffles lower on the glycemic index and, because some white sugar is filtered through bone char, it may not be vegan-friendly and so should be avoided. Finally, more cocoa powder was added into the ganache to make up for the extra liquid, and to pack in more rich, chocolaty flavour.

It's up to you to decide between chunky or smooth peanut butter, or another nut butter entirely. Keep flavour in mind, and remember that natural nut butters (nuts only, without other ingredients) work very well while minimizing additives. For this recipe, I used chocolate almond milk by Almond Breeze, but chocolate So Good, Silk Soy, or Ryza could also be used as substitutes. The original recipe uses coconut milk, so these truffles aren't as high in fat, but still amazingly rich and delicious.

Combine the dark chocolate, peanut butter, milk, syrup, and 2 tsp cocoa in a double boiler or a metal bowl sitting on a half-full pot of lightly simmering water. Wait patiently for 8 to 10 minutes.

Using a tablespoon, melon baller, or tiny ice cream scooper, pick up small amounts of ganache and roll them quickly between your palms to round them out. Drop them into a bowl of sifted cocoa and shake the bowl around to coat them.

Excess cocoa powder can stick to the truffles and make them taste chalky or dry. Put the finished truffles in the freezer for a few minutes so that they're hard and won't dent, then carefully drop them one by one into a soup bowl. This will tap off the extra powder while keeping the chocolates from rolling away.

Serve at room temperature in your container of choice. I like them in bowls or tiny muffin cups, or wrapped in boxes or mason jars as gifts. For the bake sale I put them into cute little dixie cups, which made for great presentation, and also inclined buyers to donate more for them, as each serving consisted of a whole cup of truffles instead of just one or two. I did it for the animals. 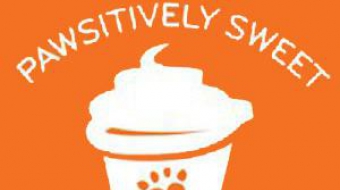 Buy animal-product free treats, and help save an animal's life.
Paul VoykinFeb 28th, 2011
Speak up about this article on Facebook or Twitter. Do this by liking Vancouver Observer on Facebook or following us @Vanobserver on Twitter. We'd love to hear from you.