Living in the aftermath of David Kato's death 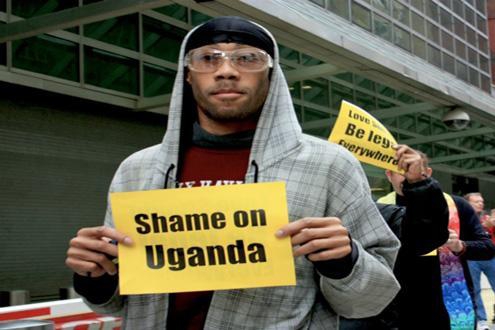 Protests and vigils happened around the world...but what's next for those still living in fear?

Since the murder of David Kato at the end of January (beaten to death with a hammer) things have been very tense for other gay men and women in Uganda. What made things even worse was the very real possibility of a cover-up by the local police and government who stated after arresting the suspect that he killed in self defence because he was a victim of sodomy and held against his will by Mr. Kato.

The following interview was done in the capital city of Kampala and offers some interesting insight into what life as a gay man is like there.

In a post-Kato Uganda, things are scarier than ever.  From Uganda's The Daily Monitor:

He sits at a table with his fingers encircled around the tail of a glass filled with Smirnoff. He is at a Kampala nightspot and has dissolved into the crowd, looking just like any other reveller. What most people at the bar would not know however, is that he, plus a couple of his colleagues at the venue, is homosexual. He demands that his identity is hidden if he is to be quoted in the papers instead; he proposes a pseudonym, Alan Mukasa.

He gives off no signs that he is gay. He’s not dressed in a tight fitting pair of jeans, commonly known as skinnies, his hair is a natural un-treated neatly trimmed black, he has no studs or earrings, wears no make-up or anything that may attract undue attention to him. “It’s a security precaution one has to take,” he says. “The best way to hide is to fit in."

"Be as ordinary as everyone else and there will not be many questions to ask, and answers to give,” he adds. There is an ever-present sense of consciousness that runs on autopilot in the Ugandan gay man’s mind, Mukasa says. But that was before the murder of gay rights activist, David Kisule Kato last month, which, as Mukasa says, “Forces you to ask yourself whether you have watched your back well.”

Mukasa and Sam Musiime (also not real name), say the gay Ugandan living in the closet now has to add even more latches and keep the world away from the skeletons. “The aftermath of David Kato Kisule’s death is a strange atmosphere of confusion, fear, sadness, shock, and terror,” Musiime says, adding, “After watching a pastor deliver a less than savoury hate speech at his funeral, all I could think is, ‘they must think we are all mad’.”

Musiime and Mukasa are both in their late 20s and have kept their orientation a secret from many for nearly a decade now. “You tell no one. Only gay people like you ever get to know, and even then, you watch which gay person gets to find out because they too could sell you out, accidentally or not,” Musiime says. “The key is to ease into society as much as possible, behave like everyone else, even flirt with girls to portray the usual boy look,” Musiime says.

Musiime then expounds on how he now has to rethink his security. “After Kato’s death, something is triggered in you and even makes you think somebody you do not want to know already knows. Now I have to recheck my passwords – on my computer and phones so that no one accidentally runs into photos or any material that would raise suspicion. You fear that even if people would not kill you, you would lose the respect that those who don’t know still have for you,” he adds.