Back stage at John Galliano...that's some big, fur hat!

It's true- I'm a big lover of fashion and it's important for me to keep up on what to expect in the coming months. I have to tell you though, I'm a bit warry after seeing the Men's collections in Paris over the last few days.

Sure, there were some nice pieces from Gaultier as he channeled the classic tailoring of Savile Row and some sporty neoprene wetsuits paired with evening jackets, but a pistol packing, stiletto heel-wearing secret agent who relies on his masculine muscle and feminine charms to save the world? I'm not so sure about...

But they are saying this IS the year of the trans- so maybe he is indeed on point. He even closed his show with the very beautiful Austrian male model Andrej Pejic who made his first appearance for Jean Paul Gaultier, looking sexy in a suit and simply divine in fur and gold lame.

Then there was the twisted mind of the always entertaining John Galliano. It was part Russian revolution and part Pirate. Again we saw the tight leggings and tights- which means all the guys out there had better start hammering out the leg workouts if they want to dare to wear anything couture next Fall!

The head scarf thing is mildly attractive and is a good alternative to the touque but looks like a lot of work to get 'just right'.

Truth be told- everyone looked a bit angry. I suppose it's the result of the impending Winter months and all, but come on, a smile can do a lot to warm the soul.

Slighty more safe and classic was the collection from Louis Vuitton- pictures below- where inspiration seemed to come from the 80's with a bit of a mod twist and some pops of acid orange. We also saw MORE double breasted jackets...no denying it. They are definitely back next season. 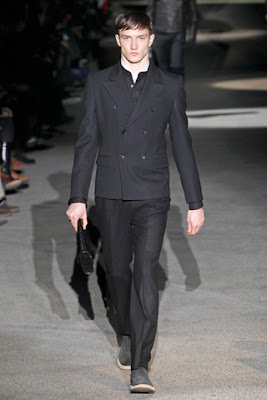 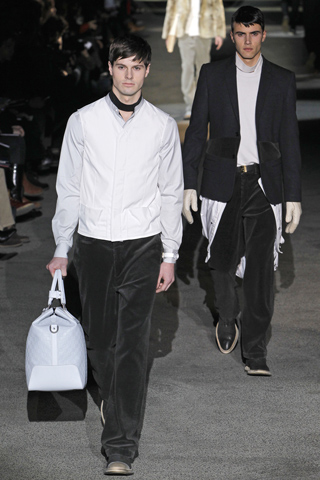 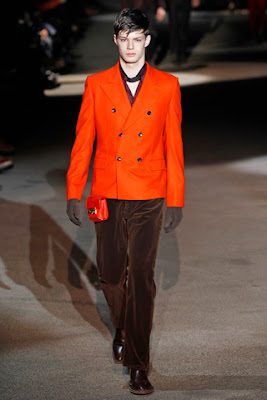 The house of Dior brought out some Amish inspiration in mostly greys and blacks and showed a much more forgiving blousy pant suit.

So what do you think? Is men's fashion moving in an interesting and inspiring direction? At any rate, it seems to be getting people to talk- and open their wallets.

Now I'm off to the gym to get in a good leg work out!