A  great day for Canada and a lesson for the USA...

Today marks the tenth anniversary of the first same-sex couples legally being married in Canada. In the recent census, over 7, 500 married couples identified as being same-sex. To this date the sky has not yet fallen.

The two Canadian couples who made international headlines and North American history by being the first to be legally married will renew their vows, along with 50 others, in a tenth anniversary celebration in Toronto today.

Joe Varnell and Kevin Bourassa, pictured below,  along with Anne and Elaine Vautour, were the first to be married in Toronto at Riverdale's Metropolitan Community Church on January 14, 2001. 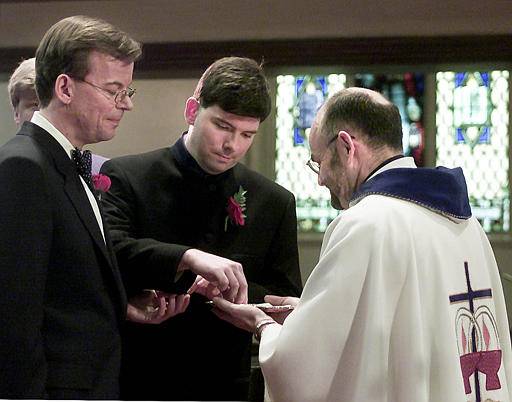 Since then, same-sex marriage has been upheld as a constitutional right across Canada. It has also become legal in several other countries and states. Ten countries in total to be exact and six US states. Civil partnerships are also offered in many countries and states, and Mexico City has full gay marriage rights as of this past July.

"I had no idea how huge this was going to be for so many people. It made a huge difference in the world," said Anne Vautour.

The couple have buffed up their wedding rings for their big event. "After ten years they're looking a little scratchy, so we had them polished," added Elaine Vautour.

Rev. Brent Hawkes married the two despite protests and death threats. He wore a bullet-proof vest at the ceremony and was under police protection during that time.

"There were 50 police outside, searching people as they came into the building. It was all so terrifying. The night before, I called my family and told them, 'I love you. If anything happens to me, I love you,'" Hawkes recalled.

Since then, he has performed hundreds of marriages, and most of the couples are still together. But Hawkes said the struggle for equality rights in Canada is not over, especially for those who are transgendered. He said their rights in law have not [yet] been recognized.

Earlier this week, Saskatchewan's top court said marriage commissioners cannot use religion to say no to nuptials for same-sex couples. The Appeal Court had been asked by the government to rule on a proposed provincial law that would have allowed commissioners to cite religious grounds in refusing to marry gay men or lesbians.

The issue arose when commissioner Orville Nichols, a devout Baptist, refused to marry a gay couple in 2005.

How many same-sex marriages have you attended? I, for one, can tell you that the gays sure know how to throw a party, and, if anything, this has really boosted the wedding planning market. Google 'same-sex wedding planning,' and you'll get almost 300, 000 results. Websites, vacation packages, books and gift registries abound.

Have a wedding coming up or a story you'd like to share about your own gay wedding nuptuals? Message me here and tell me all about it.

And again, congratulations Canada and the rest of the free, intelligent world... eventually the rest of civilization will wake up.

With files from the CBC