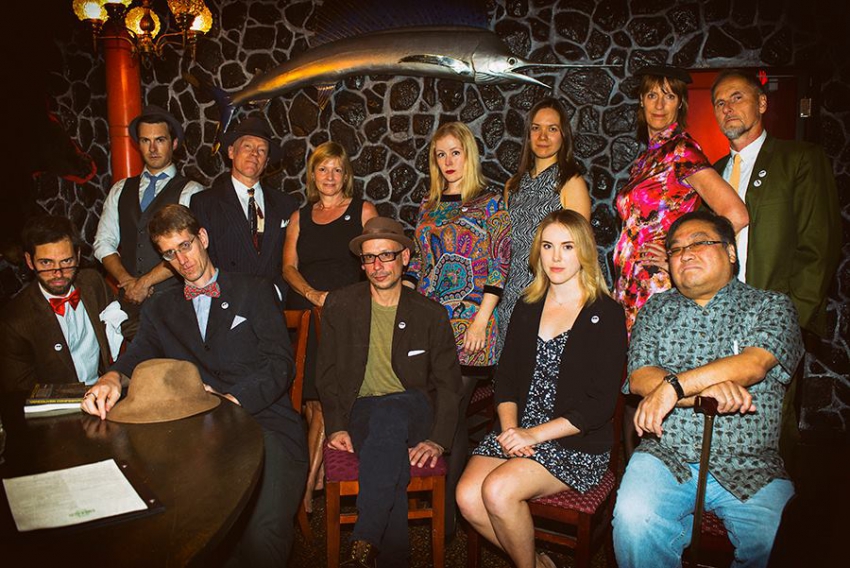 Men in pinstriped suits, fedoras and skinny-brimmed trilbies. Women in silk, rayon, crêpe de Chine—beaded headbands and pillbox hats. It might have been 1935 in a Vancouver speakeasy.

But it was last week at the Emerald Supperclub, a party to celebrate the publication of Vancouver Confidential, which “honours the hustlers and the hobos, the mobster and the muscle” of Vancouver’s checkered past.

While novelist and artist Douglas Coupland seems to think that a city without a history opens itself to a future of wider possibilities, historian and Vancouver Confidential editor John Belshaw disagrees.

In a phone interview earlier this month, Belshaw explained why he felt the need to bring together historians largely from outside academia for this project. People like Actor Will Woods who leads “Forbidden Vancouver Walking Tours”, for example, and crime analyst Cat Rose who conducts “Sins of the City” tours sponsored by the Vancouver Police Museum. Then there’s also James Johnstone, who Belshaw calls the “’house history guy’ whose excitement for the layered fabric of the East End knows no peer.” What they have in common is an insatiable curiosity and a love of this city that goes well beyond the relentless sanitized hype of public relations firms.

As Belshaw points out in his introduction, “On any given spring day, there are more people learning about Vancouver’s history from the contributors to this book than there are in every undergraduate British Columbia history class in the world combined.”

On the phone, Belshaw said that his interest in the project came from a sense that Vancouver had “a less shallow, a grittier, and more substantial personality” than “the city’s elite has wanted to convey.”

From boom to bust

In the pages of Vancouver Confidential, we meet the organizers of The Relief Camp Workers Union Strike of 1934 and the mayor who read them the Riot Act—literally. We encounter the men who lived in hobo jungles near the city dump, vaudeville and burlesque artists, nightclub owners, corrupt cops, and Japanese underworld kingpins. 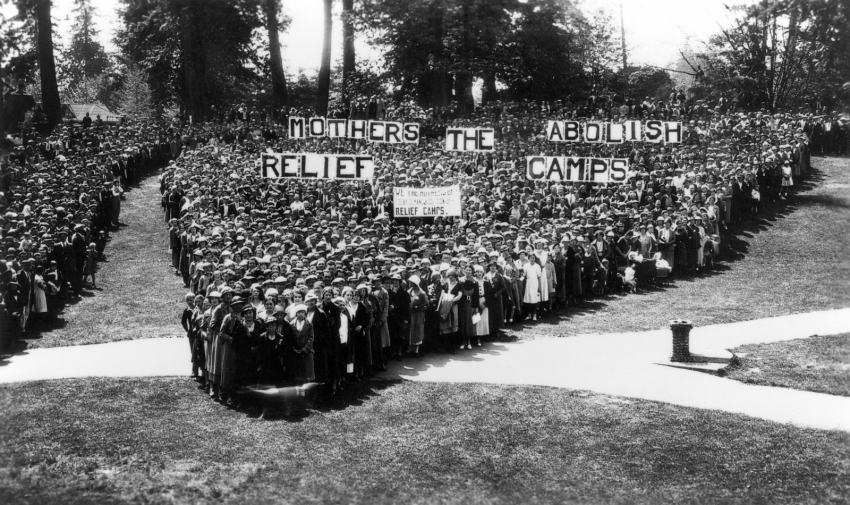 Photo: Mother's Day protesters in support of the The Relief Camp Workers Union, 1935. The Vancouver Sun.

Vancouver started out as a boomtown. There was money to be made here—a lot of it. “Shipyards and saw mills, a dark, oily smoky mess: that was the smell of money,” said Belshaw. “Vancouver was a strong industrial waterfront town.” The new wealthy wanted to “present the face of a sophisticated city. And they failed to do that.”

Busts follow booms, and Vancouver has had its share of hard times. The first half of the last century is what interested Belshaw most. The book focuses on the period between the early twenties to the mid fifties, a time when he says, “people are making ends meet—selling booze off the back porch or running numbers. It’s a story of recurring crises, a consciousness of loss. That’s a long time to go without a sense of a city being beautiful or doing well.”

Tom Carter’s interest in the project began when he was trying to salvage whatever he could from the Pantages Theatre before it was torn down. A well-known painter of Vancouver cityscapes of the 30s and 40s, Carter is passionate about Vancouver’s history. In the 1930s, Carter’s grandfather owned the café across the street from the Pantages.

“I was acting on instinct,” he said in a phone interview. He found ledger books, blueprints, posters, even a few of the original 1907 theatre seats.

“It was beautiful inside,” he said. “It was a big, gaudy, plushy theatre with gilt plaster. Everything was in tact from when people were on stage. All these ghosts. All of these stories to be told.”

And yet no one seemed to know the history, so Carter started to dig into it and discovered the group of men he came to call “the nightclub czars.”

John Belshaw had seen Carter’s paintings and attended a talk he gave in a local gallery. Then Belshaw called him to see if he could use one of the images for the cover of his book, Vancouver Noir, but they went with a black and white photo in the end. When it came time for Belshaw to gather local Vancouver history buffs at his at his house in Strathcona to talk about the project that would become Vancouver Confidential, Carter was there.

“I had heard of everyone in the room,” said Carter. “If you’re into heritage, these were the stars. Eve Lazarus, Will Woods, Aaron Chapman, Lani Russwurm. I was honored to be part of it.”

Belshaw intended to gather “a bunch of people who have individual and distinct takes on Vancouver history.” These bloggers, actors and tour guides, he said, “are creating a much larger conversation about Vancouver” than could be created by conventional historians.

And readers have responded. In the first week, Vancouver Confidential topped the bestseller list of the Association of book Publishers of British Columbia.

Katt Duff loves sleep so much, she had to write a book about it
Alfred DePewSep 12th, 2014