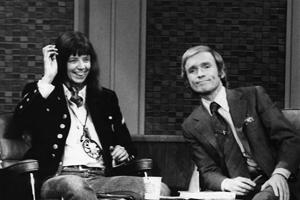 “Credit card numbers are transmitted directly to Paypal for verification and are not retained by Jill Johnston in any way.”

That’s the sentence that appears under the link to Johnston’s website that a friend posted on Facebook Sunday afternoon, announcing the death of feminist icon and American writer, Jill Johnston. It’s the kind of thing Johnston might have written herself, and I imagine she is amused—deeply, highly, and now celestially amused.

Thespian lemonist, dance cricket, and irrepressible funster, Jill Johnston seemed to be everywhere in the 1970s—in the Village Voice, on the Dick Cavett Show, in Time magazine. And then she wasn’t. And then she appeared again in a conversation with the sound poet Anne Witten in 1985 on an island off the coast of Maine.

I pointed to her feet.

“There’s a photograph of Jill Johnston wearing boots just like that,” I said.

“I knew Jill,” said Anne. “In New York, in the old days. But I knew her lover Jane better. In fact, that’s where Jill got most of her funniest lines.”

Seven years later, I met Jane at Anne’s funeral, and we got to laughing about the days that became known as the Sexual Revolution, a term probably coined by Time magazine.

Then Jane told me that a publisher had once approached Jill to write a book about those years, the 60s and 70s, in New York, but Jill had lost interest. She was on to something else and asked Jane if she would write it for her.

Jane said no thanks.

“Who remembers?” said Jane. “Was it Kate Millet who threw the jar of pickles at Ti-Grace, or did Ti-Grace throw the pickles at Kate Millet? Was it even pickles? It might have been anchovies. And what the hell was the argument about in the first place?”

Besides, the revolution was over.

My friend Kris introduced me to Jill Johnston’s column in The Village Voice in the 70s. We were students at Webster College outside St. Louis. Sometimes we couldn’t even get it out of the bookstore. She’d start reading it out loud, and we’d have to sit down on the floor and finish it—laughing and in awe. With titles like “The Genius I've Squandered in Bed,” “R.D. Laing: The Misteek of Sighcosis,” and “Tender Gluttons,” her column was an event in our lives. Food for thought dropped by helicopters into a cultural famine. She was an ally. A big sister. A real sheroe, as Kris put it.

I bought a copy of Johnston’s Gullible’s Travels, a selection of her columns, before I left to teach in France in 1975, and I carried it with me for two and a half years all through Europe—dog-eared, coffee-stained, with tiny black burns on some of the pages where bits of burning tobacco had landed. Well read. Well loved.

Tonight I went to a pot-luck supper in East Vancouver, a lively group of painters and cultural workers. One young woman, enthusiastic about all things Queer, said she’d never heard of Jill Johnston. Never mind. This woman is young enough to be Johnston’s grand-daughter, and as Johnston once said, “Telling it like it is means telling it like it was and how it is now that it isn't what it was to the is now people.”

Feisty, irreverent, difficult, incomprehensible, surreal, as one critic put it, she was "part Gertrude Stein, part E. E. Cummings, with a dash of Jack Kerouac thrown for good measure."

It’s midnight the day after her death, and I still can’t find an obituary anywhere but on her own website, where her lover, Ingrid, writes: “May her liberated spirit guide us on our paths.”