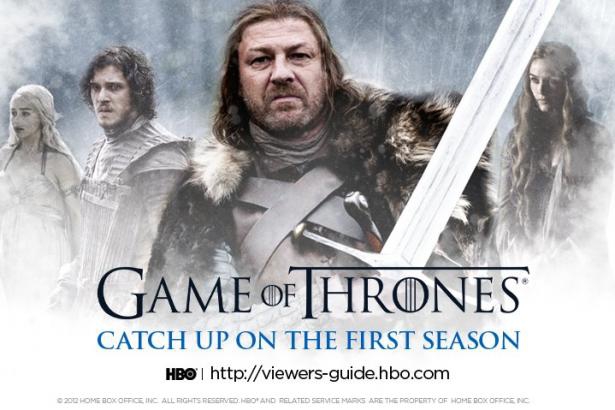 The final episode of Game of Thrones first season created buzz as one of the most shocking HBO season finales. After the beheading of Ned Stark, and his daughter Sansa coming to the realization of just how powerful the Lannisters can be, viewers were left wondering, will Sansa be forced to wed the new King Joffrey, and be trapped under his grips in Kings Landing forever?

In light of the April 1 season two premiere, the gripping action of season one can be viewed on the big screen on Friday, where the Vancity theatre will be hosting an all-day marathon of the Emmy nominated Outstanding Drama Series. Aside from the prize giveaways, another fantastic reason to make it to this event - a photo opportunity with the famous Iron Throne, built of a thousand swords.

Being an HBO series, viewers can expect nothing less from Game of Thrones than plenty of action, gory imagery, and knuckle-clenching battle scenes... all wrapped up within an extremely captivating story line. Categorized as a medieval fantasy and based on George R. R. Martin's novel series, the integrate story line leaves viewers marveling at the edge of their seat while following the noble families of the Seven Kingdoms of Westeros in their struggle to control the Iron Throne.

The free screening of each episode will play at Vancity Theatre on the hour beginning at 8 a.m. on Friday, March 23. Although you can come and go as you please throughout the day, Vancity asks for guests to arrive before each episode screening begins.

Seating is first come, first serve, and the first 40 fans to be seated for the 6 p.m. finale episode will win a box set of the complete first season. Costumed characters will be on site and available for photos from 5 p.m. - 8 p.m., and an ultimate game of Musical Thrones will take place where contestant winners (already chosen) will battle it out to win the grand prize of an $1,000 gift certificate,  the complete first season, and an autographed copy of "A Song of Ice and Fire" from George R.R. Martin himself.