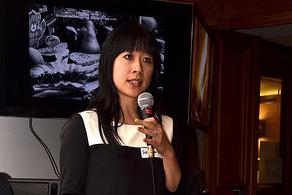 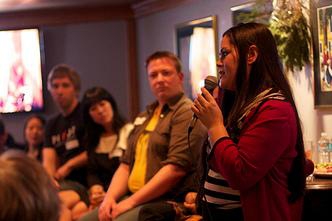 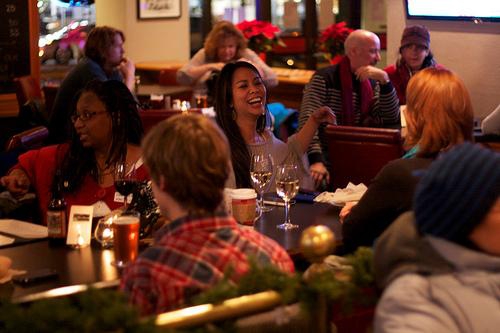 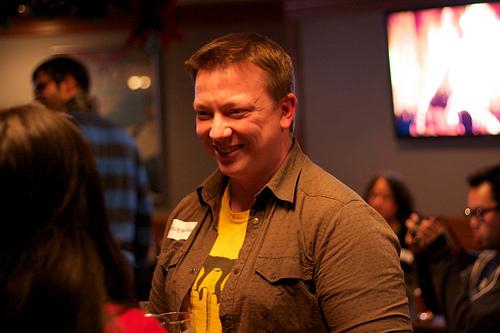 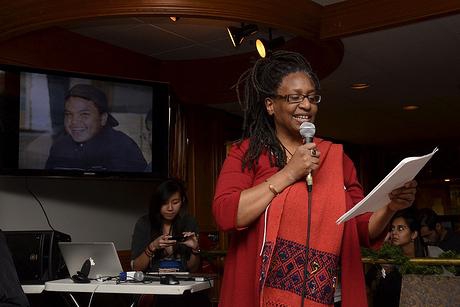 As I got ready to leave for the East Van Love Tweetup at The Hood pub in Mt. Pleasant, many things buzzed about my head. Is it okay that I’m not from East Van? Can I tweet quickly enough with my blackberry instead of the twitter-friendly iPhone? What should I wear? And most importantly, what even happens at a Tweetup?

Many of my friends and colleagues who are less involved with Social Media assumed that I’d be in a room of “tweeters” rapidly tweeting to each other. Actually that’s sort of what I thought too to be honest.

Boy was I wrong. The room was packed full of people, many who you could consider “tweeters”, but despite a lot of tweeting going down, there was more to the East Van Love Tweetup than I believed there would be.

I arrived just in time for the introductions by BeeVancity's own Ajay Puri (@Masalapuri) and Kimberley Ong (@KimieOng), the emcees of the event. Right from the get-go I could feel the East Van Love in the room and felt immediately in place, and even sat front and center fixated on each speaker as they told their story, like a parent would attentively watch their child’s spelling bee contest.

Not to say that there was spelling involved but there were a few interesting “acronyms” being thrown around, including DTES (Downtown East Side) and my favorite, STFU, which was on a sign that co-organizer Stefanie Chua flashed to let the speaker know that they were out of time. With East Van Love of course! 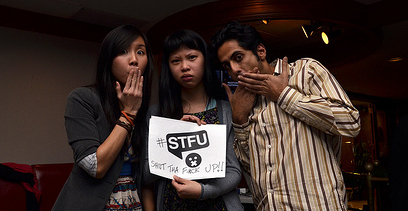 The speakers that night were eager to share their stories and were as detailed about their organizations as they could be in the five minutes that they were allotted.

The passion the speakers had for their organizations and initiatives in which they were involved resonated in their voices and held the audience captive as they told their stories. Audience members asked them, “How can I help?” “How do I get involved?”

For each speaker there were obviously different ways in which to help and I would suggest contacting them each individually for more information. Here is a brief summary of what each speaker's organization does:

Grounded in the belief that poverty and social exclusion are not inevitable they work to build a community committed to marginalization of the people and tackle human rights issues such as homelessness, police misconduct and exploitation of sex workers.

The Beauty Night team believes that everyone deserves to be treated with dignity and respect regardless of socio – economic status. They build self esteem and change the lives of women and youth living in poverty through 3 streams of programming: wellness, life skills development and makeovers.

Caroline ended her presentation by leaving us with this thought: "Volunteer, donate, raise money for a cause that is dear to your heart, because you'll get more than you give when you find an organization that reflects your values."

REACH strives to improve the health and well-being of our community, with a focus on accessibility and excellence in primary health care. They even teach a program on how to cook with vegetables to promote healthy living which I thought was great as many people are bored with plain veggies and never eat them! Eat your veggies!

Urban Ink encourages and collaborates with emerging aboriginal artists and artists of colour to develop work that speaks for cultural integrity and a form that is self-reliant in its vision.

The DTES Women's Centre is about solidarity, connecting and relationships. It's about empowering women rather than being a charity for victims. This message was tweeted about repetitively, as well as vocalized by a woman from the DTES named Joan who benefits from Harsha's compassion and care.

Potluck is a registered charity whose café and catering revenue is directly invested back into its 5 community social programs that are integrated into its daily operations. It is a leader in social enterprise and an inspiring entrepreneurial model for Downtown Eastside community economic development and revitalization.

At the end of all the presentations there was an opportunity for Q and A.

What does EastVanLove actually mean? was a really good question asked by Ajay Puri. The panel took a moment to reflect, with Dave MacDonald being the first to respond: community, diversity and empowerment were common themes among the speakers . I couldn't agree more, especially after tonight's presentations and the inspired response from the East Van audience. 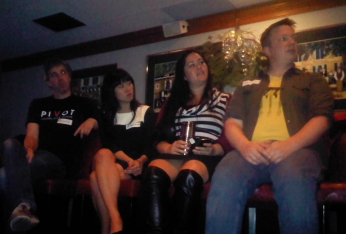 Following the Q and A, the event gave an opportunity for those in the audience to pitch their own initiatives in 30 seconds. Some mentioned were Pads for Girls (@Pads4Girls) an effort by LunaPads who has been sending pads as donations to women and girls in developing nations since 2000 who have little support to deal with their menses. Another was Creativity Heals, who held a fundraising event for the Vietnam Flood Relief on December 11. Event Info. Lastly, Donna Mayhem from Let Youth Belong (@LetYouthBelong) spoke up to explain her ongoing project working with the community to protect vulnerable children and youth in our province, by looking for innovative methods of reaching and supporting them. Visit their site at a letyouthbelong.com

This was a great opportunity for local non-profits to gain exposure and support from those in the community who care about East Vancouver and the DTES, as well as those communities in need globally.

Despite my initial doubts, the East Van Love Tweetup was a moving experience for me that made me want to be more involved in my community, whether I'm from East Van or not. It was great to see that East Vancouver Love is so prominent and prevalent and I would love to see if other communities in Vancouver are as united as they are. An area which I plan to explore further...stay tuned.

For a summary of the night's tweets check out Steph’s storify.

And stay tuned for Vol 5 on Food and Sustainability, which I hope to help organize! Know any inspiring organizations or initiatives? Email me @[email protected] or tweet me @kellyjean247!