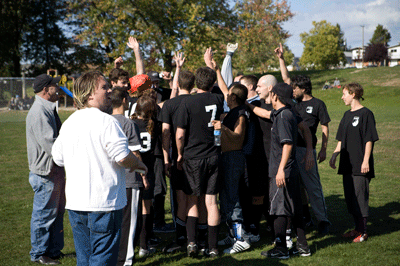 Portland FC at Moberly Park. 5 Players from Portland FC along with 3 players from the Sun Eagles take off for Rio for the Homeless World Cup in less than a month. Photo credit. Megaphone. Ken Villeneuve, John-Ward Leighton, Kevin Hollett

Canada’s players in the annual Homeless World Cup take off for Rio de Janeiro in less than a month.

The team, made up of 5 players from Portland FC (named after the Portland Hotel) and 3 players from another DTES team, the Sun Eagles, is preparing for the annual tournament which is being held in Brazil this year beginning September 15. More information about this year’s tournament can be found at the Homeless World Cup website.

Before the practice began I chatted with Patrick, who, along with goalkeeper Kevin (who was absent today), was elected captain of the team on Sunday. Many of the team’s players, like Patrick, have not travelled outside of Canada. Patrick had just received his first passport and he told me that it looked good.

The practice was great. One of the things that impressed me was that the players themselves organized a “drill”. I’ve played and coached many teams over the years, and my experience is that when there’s no coach, most players don’t organize activities, they just settle down and play a game. I was impressed that the players I played with today began the practice by organizing a figure 8 passing activity ending with a shot on goal...

Some general background on the Homeless World Cup...

Canada has been participating in the Homeless World Cup since 2004. The picture above is Canada's 2007 entry in the competition.

This years' team is based in Vancouver and practices at Andy Livingstone Park. The players for the team are chosen according to a variety of criteria, which I don’t yet understand, but which are not strictly skill-based.

The Homeless World Cup game itself is a variety of indoor soccer which has quite different rules than regular soccer. Teams are four to a side on the field, including the goalkeeper. The field is a reduced size field with small nets.

Currently, the Canadian team is still raising money to fund its trip to Brazil. The team has a fundraising goal of $10,000. Donations can be made here through the Portland Hotel Society. If you make a donation put a note in the Notes section saying that your donation is for the Homeless world cup team.