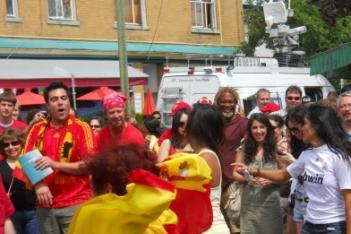 1)     Has the science of defending made the game too fragile? The final was dramatic, but not beautiful. At the highest level very few goals are scored and so much depends on referees decisions. If the unlucky Heitinga had not been sent off with less than 5 minutes to go as a result of Iniesta’s quasi dive, would this have likely been the 3rd of the last 5 world cups ('94 and '06) to be decided on penalty kicks?

2)     Will FIFA finally allow goals to be reviewed by video replay? With so much depending on the referees decisions, is there anything else that can be done to make them more reliable?

4)     How good is Spain really? Can they repeat? Will they score more goals if they do?

7)      (Asking as an English fan) Are England good enough to have any pretensions of getting past the quarterfinals?

8)      What has to happen for the African teams to succeed at the highest level?

9)      Has South Africa benefitted from holding the World Cup?