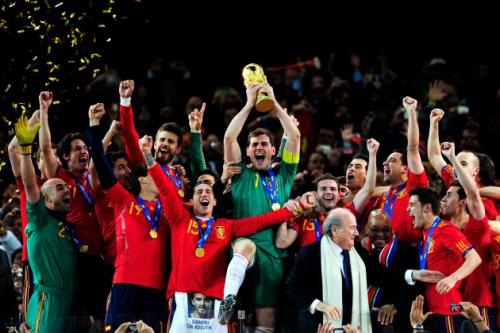 Overall, Spain did deserve to win, but it would have been a lot nicer had they won on less controversial terms. The first half of the game was very dull as Holland had expertly clogged the middle of the field. By clogging the middle of the field Holland was able to prevent Spain's playmaker Xavi from getting possesion of the ball.

In the second half, Holland had a very good chance when Arjen Robben was sent in alone against Iker Casillas but could not beat the Spanish Keeper. Robben had a similar chance in the 81st minute but was held back by Carles Puyol and tried to stay up honorably but couldn't finish.

Robben was outraged, as he felt that Referee Howard Webb should have given a foul and possibly sent Puyol off. The game ended at 0-0 so this meant that Extra Time would decide the winner. Spain really controlled Extra time but couldn't break through and had a shout for a penalty when Xavi went down in the box, but the replayed showed that Xavi had kicked himself and fell over quite easily.

The second half of extra time brought up plenty of controversy as Holland's defender Johnny Heitinga was sent off for a second yellow when he was adjudged to have pulled Andres Iniesta down, it seemed like a clear foul, but after watching the replay it was clear Iniesta went down very easily.

The Dutch were incensed by Iniesta as they thought he was diving for the majority of the game. The magic moment finally came for Spain though as Iniesta finally did something positive as he was put in 1 on 1 with Maarten Stekelenburg and finished expertly. Spain were sent into delirium, and the Dutch were outraged as they thought that the Referees had cost them the game. The final whistle came and Spain celebrated like they never had, and the Dutch had mixed emotions of depression and outrage as they thought that Referee Howard Webb cost them the game.

Man of the Match: Andres Iniesta of Spain.