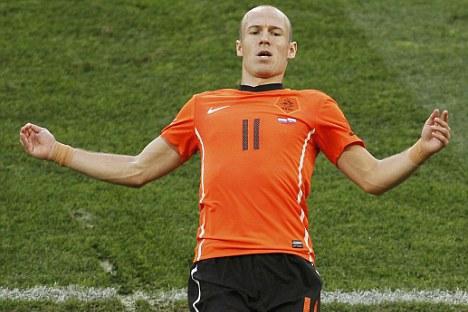 Arjen Robben is the key to the Dutch's attack for tommorow's final.

Holland is in the final for the third time, but this team has never won the grand prize. Holland shocked many experts when they beat Brazil and now will have to control the midfield. Nigel De Jong will have the almost impossible task of shutting down Spain's midfield dynamo Xavi. De Jong was clearly missed in Holland's last game and Holland will welcome him back with open arms for the final. If Holland are going to win they will need to take the game to The Spaniards or Spain's skill will overpower the Dutch. With Players like Arjen Robben and Wesley Sneijder the Dutch certainly are capable of beating Spain.

Spain are in their first ever World Cup Final and will be looking to make more history by winning their first World Cup. Spain dominated their semi-final game against Germany thanks alot to the play of Andres Iniesta and Xavi. Spain will have to have a similar performance against Holland and give the Dutch few chances due to the finishing of Holland's stars like Sneijder, and Robben. Spain will also need Gerard Pique to play much better as he has looked suspect at the back and he has almost had one mistake every game which will not be acceptable as the Dutch will likely make Spain pay.