Holland and Spain will play for the World Cup 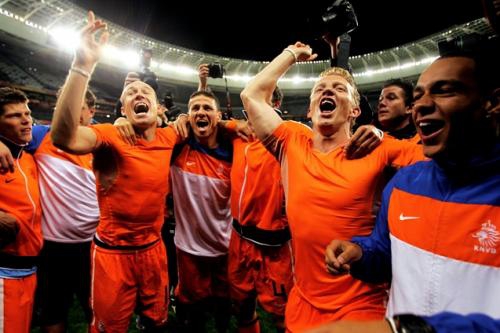 Dutch players celebrate as Holland advance to the World Cup Final for the first time since 1978.

Holland were the first team to advance to the final as they beat Uruguay in the first semi final. The Dutch came into this game without holding midfielder Nigel De Jong due to suspension. Uruguay were also missing star striker Luis Suarez due to suspension, and Captain Diego Lugano because of injury. Dutch Captain Giovanni Van Bronckhorst opened the scoring with a screamer from 35 yards out that went off the post and in to the net leaving the Uruguayan Goalkeeper with no chance. Van Bronckhorst rarely ever scores for Holland, but this goal will likely be the goal of the tournament. Holland looked to be cruising until a great strike from Diego Forlan put Uruguay on even terms. Forlan's goal was similar to many of the goals he scored this tournament from outside the box, but Dutch Goalkeeper Maarten Stekelenburg should have done better. Holland were unsettled by Forlan's strike and were happy to get half time on even terms. Holland looked better in the second half but almost went down 2-1 when a Diego Forlan free kick was well saved by Goalkeeper Stekelenburg. Holland eventually broke the stalemate when a strike from Wesley Sneijder was deflected off of a Uruguayan defender and went into the corner of the net. Arjen Robben made the game seem out of reach when he headed the Dutch into a two goal lead in the 72nd minute. It was a great header from Robben as he had to turn his head perfectly to nod the ball into the corner of the net. Holland were cruising to the finals until Maxi Pereira scored in injury time to make the last minute very nervy for Holland. Holland eventually did hang on for the win and are now off to their third ever World Cup Final.

Man of the Match: Wesley Sneijder of Holland

Spain are off to their first ever World Cup Final as they just edged out a very tough German side. Spanish striker Fernando Torres did not start the game due to a lack of fitness, and German striker Thomas Muller was out due to suspension. The first half was a stalemate with Spain dominating the majority of the possesion, but Germany looking threatning off the counter attack. David Villa had the best chance for Spain in the first half when he was put through but couldn't beat German Keeper Manuel Neuer. The half ended a stalemate with both teams looking unbeatable defensively. The second half was very similar to the first half with Spain dominating possesion. Spain finally broke through in the 73rd minute with a great header from Spanish center back Carles Puyol that was unsavable for German Keeper Manuel Neuer. The header from Puyol was great but the Germans did leave him unmarked which made it easier for Puyol to finish. Spain could've doubled their lead late on when Midfielder Pedro had a two on one with Fernando Torres but Pedro tried to play hero and didn't pass to Torres who would have defenitely scored if he was given the chance. Pedro's mistake did not end up costing Spain as they won 1-0 to advance to their first ever World Cup final. It was a shame that Thomas Muller was suspended for this game as he would have added much more to the German attack. But none of that matters now as Spain will play Holland for the World Cup Trophy, and we will have a first time Champion come Sunday.

Man of the Match: Carles Puyol of Spain