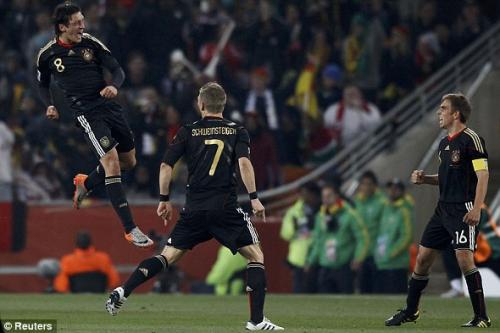 Mesut Ozil (left) will have to lead the German's attack with German striker Cacau due to injury.

The Three Lions played way better against Slovenia and were deserved of going on to the second round. Fabio Capello made two big changes by putting Jermain Defoe in place of Emile Heskey, and James Milner in for Aaron Lenon. Defoe gave Wayne Rooney more area to operate and England looked way more dangerous in front of net. England will need World Cup underachiever Frank Lampard to step up as he has been by far England's worst player in the tournament. If Lampard can control the middle of the field England will have good chances of beating rivals Germany.

Germany were not expecting to have to play England so early in this tournament. Germany are in serious injury trouble as Striker Cacau is out, Midfielder Bastian Schweinsteiger is battling fitness problems. If Schweinsteiger is not able to play Mesut Ozil will have to dominate the midfield battle for Germany. Ozil has played out of his mind this World Cup and if he plays up to his ability England will have problems stopping Germany's dangerous attack.

Mexico are looking to get revenge as they were knocked out by Argentina in the 2006 World Cup. The key for Mexico is that head coach Javier Aguirre decides to play his best players as he has been tentative to play young star Javier Hernandez who has looked dangerous whenever he is on the field. If Hernandez plays he will cause a shaky Argentina defence many problems. Mexico will also need defender Rafa Marquez to hold out a very potent Argintinean attack that is always a threat to score.

Argentina do not want this game to turn into a technical battle between the coaches as Diego Maradona will be outwitted by Javier Aguirre easily. Argentina need their defense to play better as the defence has looked vulnerable whenever a team is attacking. Argentina will also need star Lionel Messi to play to his potential as he has still yet to score in the tournament and with no Messi no World Cup glory for Argentina.