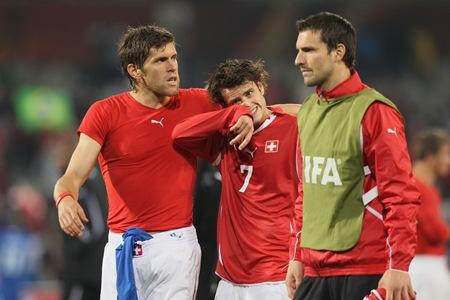 The final round of 16 matches were set today as there will be an all South American match between Brazil and Chile, and Spain will be playing Portugal.

Cote D'Ivoire came into today having to overcome a 9 goal difference between them and Portugal. Even though it was a hard task they were playing North Korea, so the task was not impossible. Cote D'Ivoire did end up coming up with a convincing 3-0 win with goals from Yaya Toure, Romaric, and Solomon Kalou. Even though it was a convincing win it was not nearly enough to send Cote D'Ivoire through. It was a weird tournament for North Korea, after they had an impressive 2-1 loss to Brazil, but they were then ripped apart by Portugal losing 7-0. Hopefully this is not the last time we see the North Koreans on the World's stage.

Man of the Match: Didier Drogba of Cote D'Ivoire

The game between Brazil and Portugal was not the most entertaining game to ever be witnessed. As a draw for both sides was accepted with no complaints, with Brazil clinching first place in the group and Portugal advancing with the draw. One of the only highlights was midway through the first half when Brazilian Striker Nilmar shot from in close was saved by Portuguese goalie Eduardo. There were no more chances really in this game.

Man of the Match: Eduardo of Portugal

Chile and Spain both advanced after Spain beat Chile 2-1. Spain were in danger of being eliminated if they didn't win. In the 25th minute Spain took the lead through a strike by David Villa. Twelve minutes later Andres Inniesta made it two putting Spain in first place for the time being. Things got even worse for Chile when Marco Estrada was sent off for a second yellow card offence. The second half started off surprisingly good for Chile when Rodrigo Millar scored for Chile. The rest of the second half both teams seemed happy to pass the ball around and not threaten offensively relying that the result in the Switzerland Honduras game was going the right way.

Man of the Match: Andres Inniesta of Spain

Fortunately for Spain and Chile the result in the other game did go the right way as Switzerland was held scoreless by a stubborn Honduran squad that didn't give the Swiss a real good opportunity at scoring the whole game. Honduras central midfielder Wilson Palacios was shutting down every Swiss attack. The draw knocked the Swiss out of the tournament after they got off to a dream start beating Spain.

Man of the Match: Wilson Palacios of Honduras