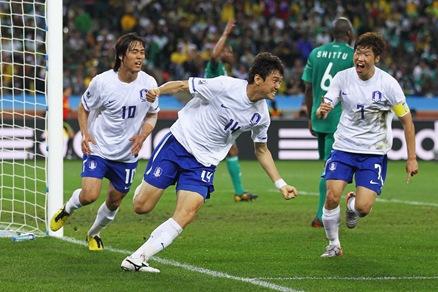 France and South Africa entered their game with the slight hope of advancing to the next round.

There was obviously still a rift in the French team as Captain Patrice Evra and midfielder Florent Malouda were on the bench to start the game.

South Africa got off to a dream start as when Bongani Khumalo knocked the ball in on a corner in the 20th minute. The game got even worse for France in the 27th minute when Yoann Gourcuff was sent off for elbowing a South African defender. South Africa quickly took advantage of the extra man when a sloppy piece of defending by French defender Gael Clichy couldn't clear a cross and Katlego Mphela took advantage of Clichy's mistake.

As the half time whistle blew South African fans were starting to believe that their team could pull off the impossible. The second half got off to a boring start and all likelyhood of South Africa making it to the round of 16 was dashed when subsitute Florent Malouda scored and made it almost impossible for South Africa to overcome the tiebreaker of goal difference.

Man of the Match

Katlego Mphela Uruguay and Mexico were able to provide a bit of entertainment for a game that was expected to be quite boring. The game got off to a surprisingly offensive start when Andres Guardado of Mexico hit the crossbar from far out. Right before the end of the first half Uruguay broke through with a goal from Luis Suarez scored to give Uruguay a 1-0 lead.

There was not much chances in the second half as both teams were pleased to stay in the position they were in.

*Mexico advance due to better goal difference Group B also had a climactic ending because of the Greeks losing to Argentina everything came down to the South Korea- Nigeria game qhich ended up having South Korea advance via a tie against Nigeria,  giving South Korea one more point than Greece.

Nigeria will be disappointed as they deserved better than just one tie this world cup, and especially since striker Yakubu missed an open net against Korea. Korea now has to play Uruguay in the second round while Mexico will be trying to get revenge on Argentina when Argentina knocked out Mexico in the 2006 World Cup.