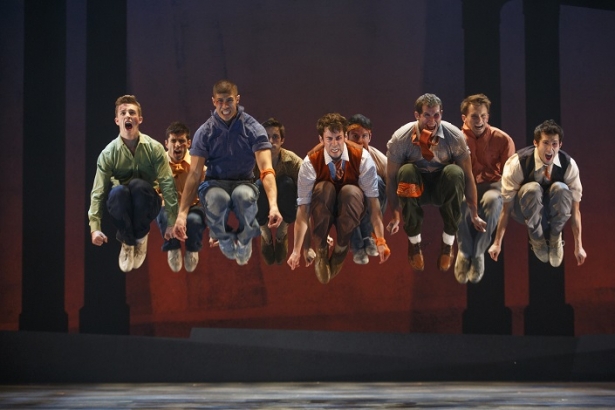 The story of Maria and Tony, based on Shakespeare’s Romeo and Juliet, returns to Vancouver at the Queen Elizabeth Theatre on February 4, 2014. The smash hit Broadway revival tour of West Side Story directed by David Saint, the Associate Director on Broadway, showcases the original Jerome Robbins’  choreography,  reproduced by Tony Award-nominee Joey McKneely (The Boy from Oz, The Life). With music by Leonard Bernstein, book by Arthur Laurents and lyrics by Stephen Sondheim  (Sondheim’s Broadway debut), West Side Story remains one of the best dance-driven musicals of all time.

Set in the mid-1950’s in an Upper West Side neighborhood in New York City, the rival gangs of the Sharks from Puerto Rico are taunted by the Jets, a Polish-American working-class group. The young protagonist, Tony, a Jet  who’s pulled away from gang life, falls in love with Maria, the sister of Bernardo, the leader of the Sharks. The dark theme, sophisticated music, extended dance scenes, and focus on social problems marked a turning point in American musical theatre. Bernstein's seminal score includes "Something's Coming", " Maria", " America", "Somewhere", "Tonight", "Jet Song", "I Feel Pretty", "One Hand, One Heart", "Gee", "Officer Krupke", and, one of the most referenced dances of all time:"Cool"..

Robbins’ choreography blends the articulation of ballet, with the lines and steps of early jazz through the lineage of Jack Cole, the groundwork and dynamics of modern and the choreographic style unique to Robbins. The idea of West Side Story was conceived by Robbins and the Broadway debut was directed by him as well. Original producer Hal Prince agreed to an eight-week dance rehearsal period (instead of the customary four), since there was to be more dancing in West Side Story than in any previous Broadway show, and allowed Robbins to hire Peter Gennaro as his assistant.

The choreography today remains as fresh as when it was first created, Bernstein's score as glorious and the book and lyrics as poignant.

Performances run, February 4-9 2014; Tuesday through Saturday evenings at 8pm with Saturday & Sunday 2 pm matinees and Sunday evening at 7:30pm. Tickets vary in range depending on performance, seat location, and date of purchase and start at $35.00 plus applicable service fees.