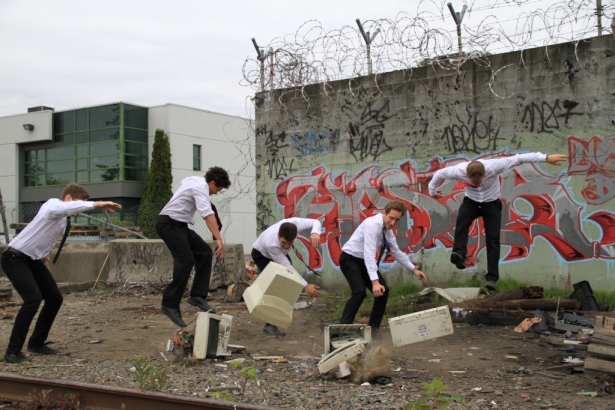 Shay Kuebler and the cast of Karoshi say no to "death by overwork".

Shay Kuebler’s Karoshi is a physical expression of the meld between eastern and western philosophy exploring  the Japanese phenomenon of karoshi – ‘death by overwork’.

The clash between extreme societal pressure and personal need is expressed in Kuebler’s highly physical pedal-to-the-metal style Thursday through Saturday, Dec 6-8 at 8:00 pm at the Scotiabank Dance Centre. It is presented by the The Dance Centre  in their Global Dance Connections series. 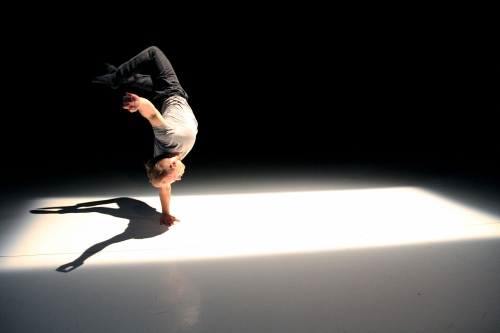 Four athletic male dancers - Scott Augustine, Hayden Fong, Nicholas Lydiate and Manuel Sorge join Kuebler in the piece that has been ruminating since Feb 2011. “”I went to Tokyo to do the first big research and missed the earthquake by less than a day,It was very scary when communication broke down, “explained Kuebler.”And then it was presented as a work in progress at the Dance Vancouver Festival in 2012.

Inspired by a New York Times article that he read about Japan in the late 20th Century filtered through the 1995 subway bombing, Kuebler  investigated the concept of Karoshi.

“So many people were trapped in the lifestyle of excelling at school to get into post secondary, to then apprentice with a good company that will then keep them on for life. There were no options and no choice.”

His love of movement, performing and the fascination with Asian culture started with his early training in martial arts and theatre. He began his performing career at the age of five with Stage Polaris Theatre Academy in Edmonton, Alberta. Soon after, he commenced his 8-year study in Shito-Ryu karate that would lead to his training in dance.

“I developed and matured as an artist in a combination of Eastern and Western philosophies, “said Kuebler. “My sensei really pushed me.”

““(In working on Karoshi) I was fascinated by the extremely honorable values like dedication, discipline and respect that I learned as a child..When pushed, these same values, could actually damage a person.”

Part b-boy, ballet & contemporary dancer, martial artist, Kuebler’s Renaissance style is hard to pigeon hole. One could define him as one of the most dynamically physical dancers on the Vancouver scene. “I love that high physicality that I think people enjoy seeing. I want to be the Bruce Lee of dance.” To that end, he is pushing his physical capabilities by training intensively on a daily basis.

Could this type-A behavior be considered Karoshi?

“It’s the balance that’s really important,“ suggested Kuebler. “It is really the mental break rather than the physical break that is the end result of Karoshi.”