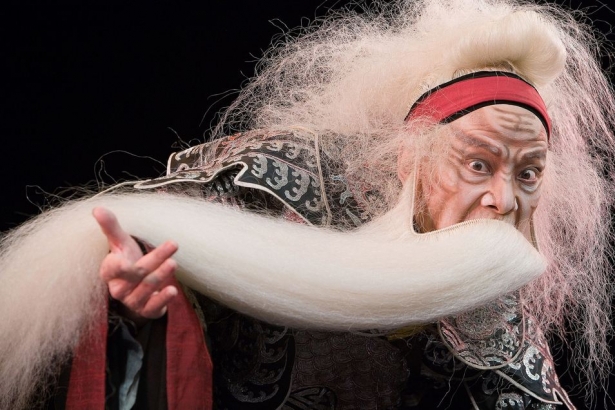 Distilling  the 16 characters of King Lear into a one-person show is no mean feat. Fusing time-honoured Peking Opera techniques with  modern conventions transforms Shakespeare’s monumental tragedy of power and deception into a thrilling theatrical experience. The PuSh International Performing Arts Festival and the Asian-Canadian Special Events Association present Wu Hsing-Kuo  of Taiwan’s Contemporary Legend Theatre February 1 and 2, 8:00 pm at the Centre for Performing Arts in Vancouver.

Aided only by costume pieces and virtuoso acting, he is joined onstage by a full complement of traditional Chinese musicians.

Chatting with Managing Director of the Asian-Canadian Special Events Association, Charlie Wu, it became clear just how important this piece is.

“Master Wu has toured this piece since 2000 extensively: in France, Edinburough, at Lincoln Centre in New York,” explained Wu. “We’ve been waiting for a show like this in Vancouver in the artistic and cultural sector to inspire us to create cultural diversity at home.”

Wu Hsing-Kuo, director of Taiwan’s Contemporary Legend Theater and a star of Asian film and drama, also was lead dancer of the Cloud Gate Dance Theater. He brings all of these disciplines to play in Lear creating a truly original abstract form.

He received a Fulbright Scholarship to study in New York with Richard Schechner in 1992. In the same year, he won the Hong Kong Film Award as best new actor. In 2002, he received a performance invitation from Gao Xinjian, the 2000 Nobel Laureate for Literature, to play the leading role Hui-Neng, the great Sixth Patriarch of Zen, in August Snow.

The play was a tremendous success at the Opéra de Marseille in 2005. In the same year,Wu was also commissioned by the Council for Cultural Affairs to help reconstruct the traditional Theater in Cambodia. In 2006, he was invited to play, at New York’s Metropolitan Opera, the Yin-Yang Master in The First Emperor, directed by the legendary filmmaker Zhang Yi-mou. After the CLT’s extensive US tour of The Tipsy Concubine, Farewell My Concubine, and King Lear, in October 2007, he directed 108 Heros from the Water Margin, and directed/performed, in December, in The Butterfly Dream with Kunqu Opera actress Qian Yi.

In 1986, he and a group of enthusiastic friends founded the Contemporary Legend Theater, revitalizing traditional Chinese Theater by adapting Western classical plays to the styles and techniques of Peking opera. He was both leading actor and director of four Shakespearean plays, two Greek tragedies, four Chinese traditional pieces, and Samuel Beckett’s Waiting for Godot. He has been a regular participant of international festivals and generally recognized as a pioneer in cross-cultural performances.

Charlie Wu suggested that Master Wu’s path to artistic expression has not been without its challenges.

“The road to his identity as an artist has been tough. He is seen in his own country as a person who has betrayed tradition. He has been criticized at home for taking on Shakespeare," he said.

“He considers it a successful betrayal, though, because through that, his vision has become successful."

And make no mistake, this Lear is a success. As James R. Oestreich from the New York Times states:

“And that was just the starting point for Wu Hsing-Kuo’s remarkable one-man King Lear with the Lincoln Centre Festival presented at the Rose Theatre on Thursday evening, This production expanded codified Chinese opera style to include Buddhist chant, contemporary music and electronics and Western elements-beyond Shakespeare’s play itself.”

To check out the rest of the shows:

Finding gold in the cracks of everything