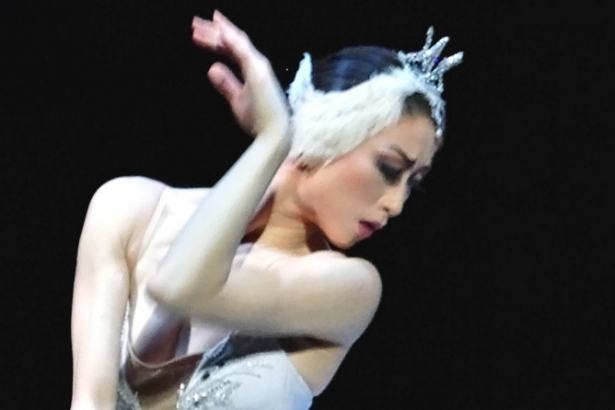 The opportunity to see Swan Lake is rare due to the enormous undertaking for a company. Not only are the dancers pushed to the limits of their technical skill and musicality but the narrative must also be served. It also requires a company able to employ large numbers and to be funded to tour. One of the top traditional classical ballet companies in the world, The National Ballet of China, is being produced by Ballet BC at the Queen Elizabeth Theatre from February 27-March 2, 2013 for four evening performances of Swan Lake at 8:00 pm .

“The National Ballet of China is doing the Natalia Makarova version which is very close to the original,“ shared Emily Molnar, artistic director of Ballet BC, who has been working with Les Grand Ballets Canadiens in Montreal for two years to bring the company to Canada. Help from TREK, a mining company, sealed the deal.

A prince, a beautiful woman who morphs into a swan by day, and an evil sorcerer tell this rather dark tale of love gone terribly wrong.

Pyotr IlyichTchaikovsky, wrote the score in 1876 and it was fashioned from Russian folk tales. Telling the story of Odette, a princess turned into a swan by an evil sorcerer’s curse and her doomed love for Prince Siegfried, Swan Lake is known for the virtuosity of the divertissement and the corps de ballet of swan maidens.

“It is the detail of the musicality and the elegance within the storytelling that makes Swan Lake so special," explained Molnar, who as a student at the National Ballet School recieved the honour of dancing the role of Odile/Odette. “The lyricism and the virtuosity of the jumps and turns along with the expression and emotion in the upper body particular to the Vagavona technique ( a Russian ballet system known for its carriage of the torso, head and arms) maintain the integrity of this version.”

The production vallues are greatly enhanced by design.

National Ballet of China is the sole national ballet company in China. Founded  in 1959, Pyotr Gusev, the celebrated Russian ballet artist, laid a solid foundation of classical ballet for the company. In its repertoire today, there are dozens of full-length ballets, including Swan Lake, Giselle, and Don Quixote. In the last 20 years, the company has staged contemporary ballet works such as La Sylphide, Serenade, Etude, Four Last Songs, Rite of Spring and also modern dance works.

“There are approximately 60 dancers in the company,“ said Molnar. “Ballet BC is a smaller company and we would not do a traditional version of this ballet. But it is the lineage of what we do. It is also culturally important to our community.”

Mme. Feng Ying, Artistic Director of The National Ballet of China said, ““I would like to express our thanks to Ballet BC for inviting us to Vancouver in February 2013 during Chinese New Year. I truly hope that Vancouver audiences will enjoy our Swan Lake.”