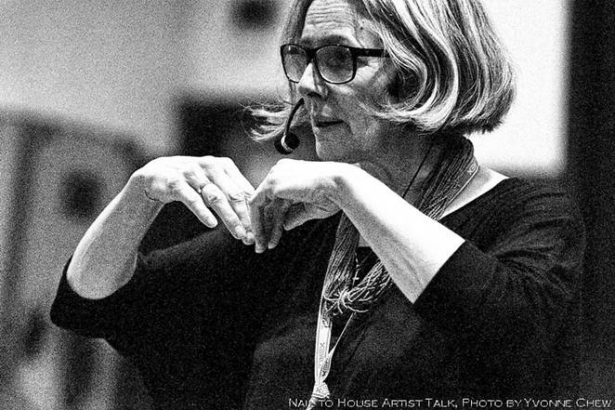 As Artistic Director of MascallDance since 1982, Jennifer Mascall investigates the potential of the human body moving in space to expand our preconceived notion of contemporary dance. With Way Out West (WOW) she offers her considerable knowledge and wisdom for a one-week summer intensive August 19-23. Including technique, improvisation, experiential anatomy, performance and yoga, it is designed for dancers and other movers.

“The inception, ten years ago, was based on celebrating the Vancouver teachers and supporting them in their work. I realized that professional dancers needed to have a teacher that they could return to and also a way to get into shape before the teaching and performing season began,”shared Mascall during a phone conversation.

“The Body/Mind Centering technique class can work for anybody” , Mascall clarified. “Yoga teachers, dance therapists, people who have never danced but are curious about somatic (of the body) expression and also people who are interested in working with me as a performer/creator on an ongoing basis.”

As an emerging choreographer, Mascall was characterized as a maverick, a visionary and a radical revisionary and “an enfant terrible of Canadian Dance.”

Her work as an original thinker and catalyst in the dance community are seen is such diverse undertakings as the initiation of GRID (1975), a collective for site-specific work, the collection and publishing of FOOTNOTES (1978, Coachhouse Press) and the founding, with seven other Vancouver independent artists of the collective EDAM (1982).

Works such as The Shostakovich, The Light At The End Of The Tunnel May Be Another Train Coming Toward You, I’ll Leave the Back Door Open and Housewerk-all characteristically inventive, insightful and witty-provoke consideration of the relationship of movement to meaning. The Brutal Telling/Traces of E. Carr, What?, A Catherdral, and Make A Dance consider equally the relationship of words to movement to meaning.