If you're running low on magic these days, Broadway across Canada's Mary Poppins can help. The show runs until Sunday July 22 at the Queen Elizabeth Theatre, where you can expect day-glow worlds filled with wacky characters and made-up words, men who walk on walls and ceilings and an unhappy family resurrected. It will be sure to throw some stardust your way.

Mary Poppins received its worldwide premiere in London's West End in December 2004, and then opening on New York's Broadway on November 2006. The show is a co-production between Cameron Mackintosh and Disney, a mix of the beloved stories by P.L. Travers and the 1964 classic Walt Disney musical featuring Julie Andrews and Dick Van Dyke. Presently, there are four productions touring three continents and it is the only show on Broadway from the 2006 - 2007 season still pulling in audiences. This is a major feat in the current climate of high-priced entertainment where many productions are struggling. 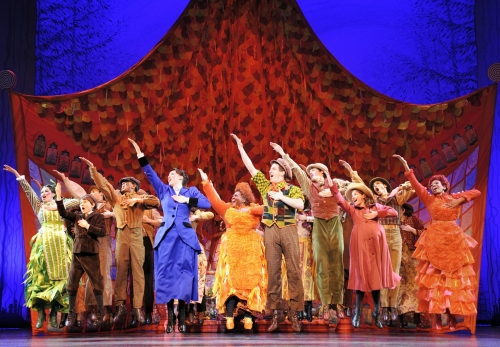 Rachel Wallace as Mary Poppins is practically perfect as the nanny filled with loving kindness and more than a little edge. Her lovely voice and movement quality exemplified by her white gloved hands charmed the family that she's come to help and the opening night audience as well.

Another standout is Q. Smith playing the evil nanny Miss Andrews and the Bird Woman. With impressive vocal expertise she nails her money notes and sings with both nuance and power.

But it is the cast that turn this slick production into a performance experience worth the price of the ticket. Even though they are in the middle of their run, they're still having an absolute blast. Mind you, doing Supercalifragilisticexpealidocious on a Lucy-in-the-Sky-with-Diamonds set eight shows a week would be considerable fun.