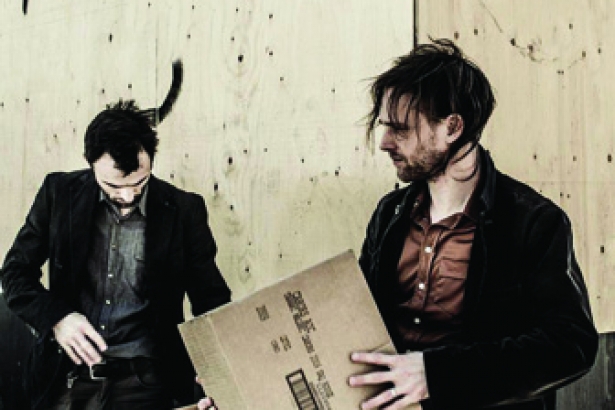 Each man performs an autobiographical solo: James by Gnam traces one man's journey from boyhood to manhood through his relationship with the North American ballet classic, The Nutcracker.  Poulin-Denis’ Cible De Dieu (Target of God) is the story of a doomed anti-hero who finds himself at an existentialist crossroads.

“We met during  the Tryptich Residency which was essentially a blind date with artists from Vancouver, Montreal , and Bassano, Italy," explained Gnam, who was chosen as one of three Vancouver dance artists in 2010-2012.Triptych was an international choreographic project hosted by the Opera Estate Festival Veneto, Italy; Circuit-Est Centre Chorégraphique, Montreal; and The Dance Centre, Vancouver. Three choreographers from each city come together in each of the host locations to undertake choreographic research.

“We spent two weeks in each city sharing our practice, interests and challenges," explained Gnam. “Jacques and I were at the same place in our careers so the discussions around how we make art and create  brought us to rigorous conversation that then led to improvisation. We used that to answer some of the questions that we were grappling with. We understood each other intuitively.”

Out of that experience came a relationship that brought the two together to share a solo show, an exciting opportunity as  Poulin-Denis’ work has not been seen on the west coast.

Cible De Dieu (Target of God) is a beautifully crafted and unexpectedly humorous piece based on the premise that every 27 years, the planet Saturn returns to the place in the cosmos it occupied on our date of birth, resulting in profound life changes linked to the planetary alignment.

Throughout his career, from his early days as a young dancer through to his time at Les Grands Ballets Canadiens de Montreal and Ballet British Columbia, James has performed the Nutcracker over 300 times. He draws on this experience to examine the place ballet occupies in peoples’ imaginations and its cultural relevance to the Pacific Northwest. Gnam’s piece, co-created with Lee Su-Feh, was first performed at the Firehall in 2010.

“It is a coming of age or rite of passage story seen through the eyes of my relationship to ballet and to the Nutcracker," shared Gnam.

Jacques and James have collaborated on several projects including the international Triptych research project and are currently working on a piece called La Valeur des Choses (The Value of Things) which will premiere in Spring 2014.