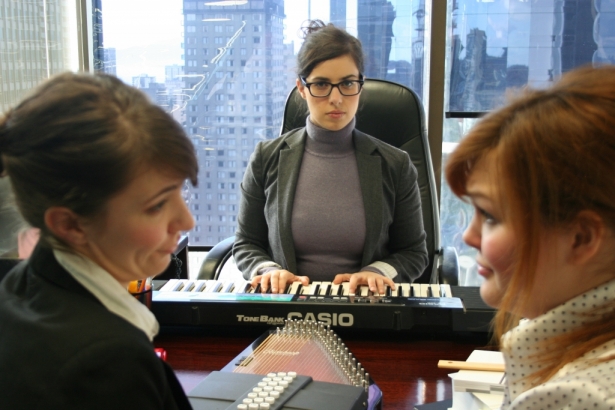 Composer of Stationary, Mishelle Cuttler, plays the power hungry boss who hides the wallflower girl she once was.

A musical play about twenty-somethings dealing with the reality of a working life after the hopeful imaginings of their post secondary education? It’s art imitating life for creators Christine Quintana and Mishelle Cuttler of Delinquent Theatre. Following sold out houses and rave reviews at last summer’s Neanderthal Festival, STATIONARY: A Recession-­era Musical  is being remounted  for a two week run at North Vancouver’s Presentation House Theatre from April 4 to April 14.

Chatting with Cuttler in a break from her day job as a part time legal secretary, the multi talented artist who lists in her arts biography composer, musical director, sound designer, actor and musician with a soft spot in her heart for novelty instruments, she explained the genesis of creating a musical from scratch.

“In 2011 we were invited to ITSAZOO Theatre Production’s Bridge Mix which led to a 10 minute short play using unusual instruments in a parking garage. It became a snapshot of people’s lives; an idea that came about as we were thinking of people looking for their car at the end of their work day.”

Developed into a full play with book and lyrics by Christine Quintana, music by Cuttler with rap lyrics by Brian Cochrane and directed  by Laura McLean, it was  produced by the Neanderthal Festival. Selling out the run encouraged a cast recording and the remount at Presentation House.

The cast, all graduates of the UBC Theatre and Film program except for Kayla Dunbar, a Studio 58 graduate and choreographer of the show who is  replacing Claire Hesselgrave this time around, tell the story of a group of bright young things in an office scenario:  “saddled with crippling student loan debts, high cost of living and a recession-era economy in a yoga and sushi-swilling succubus of a city.” 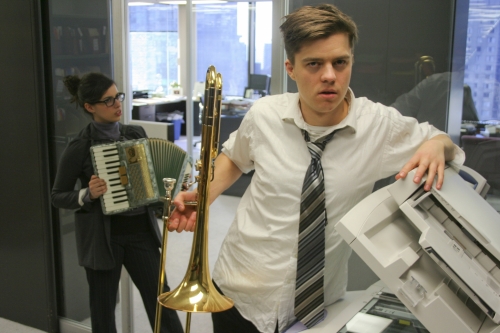 Thier level of talent and expertise is truly impressive. Every cast member plays an instrument that supplements the band of a violinist , bass and cello.

“It’s funny how all these theatre workers that we know, have amazing secret musical skills,“ suggested Cuttler.

For Cuttler, who started playing the piano at nine graduating through the Royal Conservatory of Music system and studying classical singing, composing was never on the table. Being asked to compose music for UBC MFA candidate’s Catriona Leger’s Romeo and Juliet was the start of a whole new career.

“It gave me the opportunity to fall in love with music and theatre in unison, “ shared Cuttler.  Even though her part time day job ensures the rent is consistently paid, “I’m lucky that I’m finding ways to continue to live my dream.”