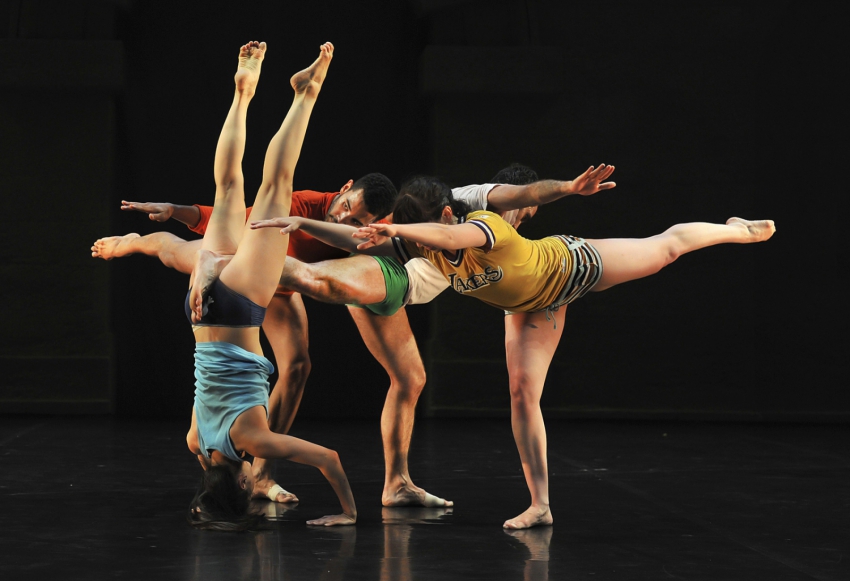 One of the strong tableaux that punctuates Empty Moves (parts I, II & III).Photo: Jean-Claude Carbonne

The Scotiabank Dance Centre invites international companies over the ocean and the mountains to engage us in a different aesthetic and viewpoint. In their Global Dance Connection Series, they started with Ballet Preljocal’s Empty moves (parts I, II & III) by artistic director Angelin Preljocal last Thursday and Friday at the Farris Theatre at their building at Granville and Davie.

Integral to the piece is John Cage’s “Empty Words”. The 1977 recording is a solo vocal work based on the writings of Henry David Thoreau, and was taped at the Teatro Lirico in Milan. The crowd's reaction is as integral to the score as Cage’s monotone listing of deconstructed words and noises.

Cage has been quoted as saying: ”If something is boring after 2 minutes, try it for 4. If still boring, try it for 8, 6, 32, and so on. Eventually one discovers that’s it’s not boring at all.”

At first responding in silence, then in rustling, murmuring, the sounds of chairs being moved and people leaving, lead into cheering, clapping, swearing, singing, yelling, and screaming outrage. Of the 105 minutes of the dance, at least half was the sounds of angry people.

The piece for four dancers, two men and two woman (Virginie Caussin, Natacha Grimaud, Sergio Diaz, Yan Giraldou) begins with the four in the upstage corner placing tape on the four indicating their home base. A phrase of movement ensues that is repeated throughout.

Angelin Preljocaj, of Albanian descent and born in the region of Paris, in France, began studying ballet before turning to contemporary dance. Moving to New York City, in 1980 and studying with Merce Cunningham, Zena Rommett and later original Cunningham dancer Viola Farber and Quentin Rouillier, this dance employs Cunningham technique.

Costumed in bright shorts and t-shirts with logos, images, and writing on them, the dancers are placed in pop culture somewhere in the late 20th century.

The dancers do an impressive job of unison movement considering there is no pulse to the score. The rhythm of the movement is paramount with the dancers often using their bare feet on the floor to pound out the pulse.

Using Cunningham’s idea of direction in body and in space, the piece is strongest when making moving tableaux that engage the four in unique partnering and when moving patterns chew up space in interesting formations.

The dancers’ stamina and endurance remains strong. In the last half hour, when they are leaving a trail of sweat when dragged through the space, we get to break away from the technique and artificial constructs of a proscenium based performance into something more elemental.

The purely abstract parts of the dance make sense with the score but when Preljocaj makes the decision to bring in literal sections, they seem arbitrary and indulgent.

The rather disturbing section where the men throw the women around like rag dolls with the women responding to them by sitting on their chests and grinding out their mouths and eyes with their elbows is one example of the literal in disaccord with the brilliant and seminal concept behind Cage’s soundscape.

Cage and Cunningham’s partnership created something that had never been considered before. Their use of chance and structured improvisation challenged our perception of art making. Cunningham collaborated with some of the best artistic minds of the 20th century like Robert Rauschenberg and created an artistic movement that has informed modern art since.

That sense of seeing something for the first time that would never be repeated again was the essence of their brilliance.

In Empty moves (parts I, II & III) highly structured and controlled environment, Cage’s score is being used as a draw without completely fulfilling its essential mandate.