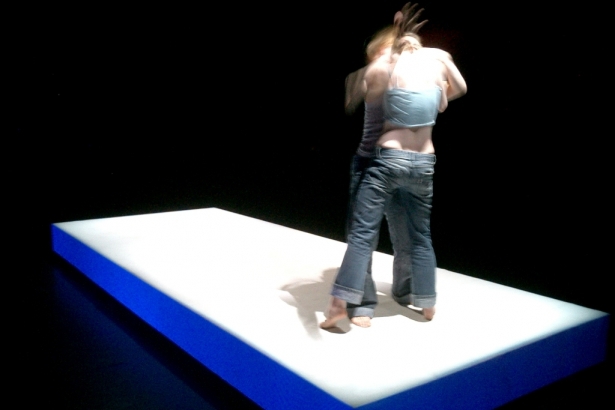 Running Sushi running October 31-November 2 is a series of episodes performed by a quirky couple on a giant sushi platter.  At  the start of each performance, the audience is invited to randomly select the order of the segments, creating a ‘menu’ of dance dishes.

“There are twelve scenes that are connected to twelve pieces of sushi. The sushi is offered to the audience and their choices determine the order of the sequences, “explained Haring in a phone conversation after landing in Vancouver from a date in Calgary. “ It is like going to an art exhibition. There might be twelve paintings, sculptures or installations in a show and you don’t always look at them in the same order. “

This method of improvisation is based on a concept introduced by avant garde American choreographer Merce Cunningham with collaborator/partner musician John Cage, called chance procedures. Phrases of movement were learnt in a sequence and then dice were rolled at the beginning of each performance to decide the order of the sequences. This ensures a fresh approach for each performance and points to the ephemeral nature of dance; unless recorded, dance is in the moment and fleeting, a gift to that particular audience.

Running Sushi was conceived, directed and choreographed by Haring. Working with companies including DV8 Physical Theatre, Nigel Charnock and man act before co-founding Liquid Loft in 2005, Haring has toured his work worldwide.

Haring has worked with Cummings, musician Andreas Berger and dramaturge Thomas Jelinek since the beginning of the company. He spoke to his process: “We start with a sound environment  using language so it’s not just body language. We use the voice to create a sound environment and start to improvise, recording the whole thing."

The dancers are a cartoon couple on the verge of breakdown, grappling with desire, shame, fashion and chopsticks. Their precisely executed movements echo the two-dimensional ‘superflat’ style coined in Japan by Takashi Murakami. Text, sound and movement combine to create a highly original, idiosyncratic and often very funny exposé of superficiality in contemporary culture.

In Liquid Loft’s performances and installations, they interconnect contemporary dance directly with other forms of contemporary art, in order to create a cohesive all-embracing piece of art. Their idiosyncratic visual and formal language, their distinctive acoustic stage-sets and professional dance production have earned Liquid Loft international recognition and awards like the Golden Lion for Best Performance at the 2007 Biennale in Venice.  www.liquidloft.at

Running Sushi is a co-production of ImPulsTanz Vienna International Dance Festival and Liquid Loft in partnership with the Choreographic Centre Linz and Tanzist Festival Dornbirn.