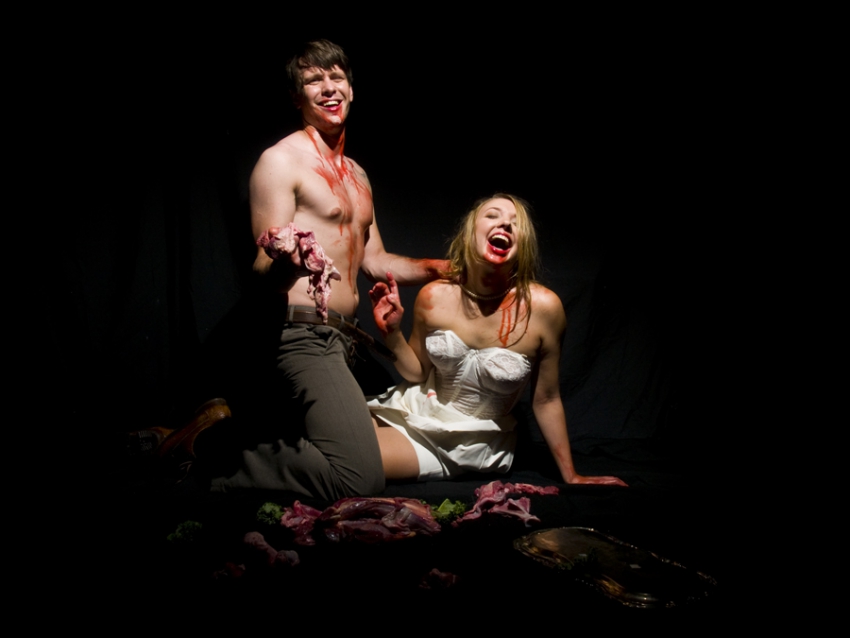 Rare is the occasion when you read a play and end up howling with hysteria. Director of Hunter Gathers by Peter Sinn Nachtrieb, Ryan Gladstone did just that.

“My wife and I laughed till our stomachs hurt, “ shared Gladstone.

The playwright, Peter Sinn Nachtrieb based in San Francisco has received numerous awards in the states but is not well known in Canada. His personal website is highly entertaining.

“I didn’t know his work before I read the play but I’m definitely reading the rest of his work,” enthused Gladstone, himself a recent graduate of the MFA Directing program at UBC. Gladstone started his own theatre company called Monster Theatre in 2000, creating 25 original plays as writer, sometimes actor, and sometimes director.

“On the first read, I thought that I knew exactly what kind of play it was and then he smashed it. It appears to be a play about four old friends gathering for a dinner party,” explained Gladstone. “Dark secrets are revealed -- and then the exact opposite happens from what you would expect." Without delving into too much detail, he said it involved "sex, murder and animal carcasses.”

Sounding like a mash-up of Who’s Afraid of Virginia Woolf?, Lord of the Flies, and Three’s Company, the characters include the hosts, a timid, homemaker Pam and macho hubby Richard. They're joined by unfulfilled and quick-witted Wendy and her husband, the brow-beaten Tom. Now in their mid-30’s, they have grown apart over the years but they reunite annually.

In conversation with Gladstone, in the first week of rehearsal, he was enjoying working with the cast.

”It’s so well written and the cast are skilled comedians. We ended up laughing a lot,” shared Gladstone. “It’s not a flippant comedy like Family Guy; it’s the reactions that are hilarious.”

Performances at Havana Theatre and Restaurant, 1212 Commercial Drive, October 30-November 15, 2014, with a Half-Priced Preview on October 29.