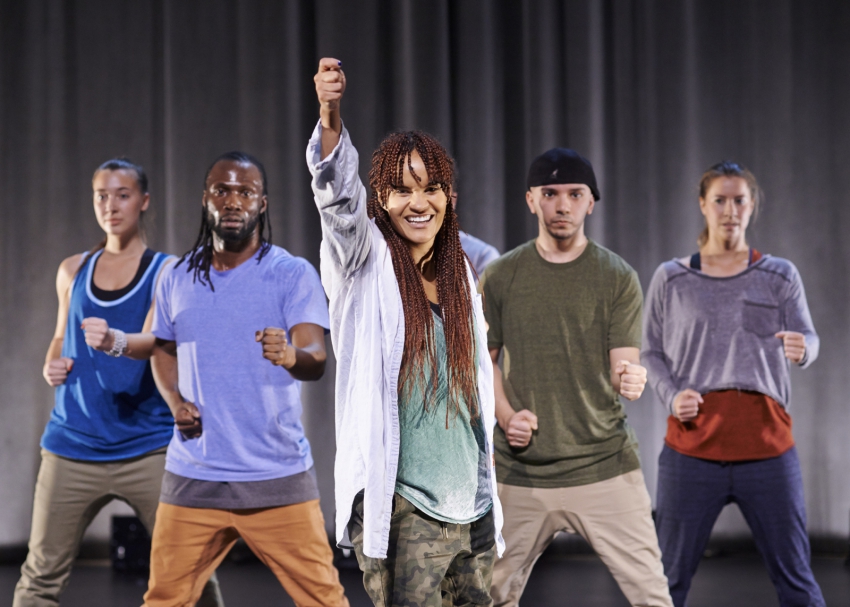 It’s the head spins, windmills, and backflips that got the crowd hooting at Bboyizm’s show Music Creates Opportunity at the Cultch, but it was the seven dancers’ insatiable groove that was the heart of the show.

Crazy Smooth (Yvon Soglo), choreographer, dancer and artistic director of Bboyizm, a company out of Ottawa, Canada, has created a show that brings street dance out of the cypher and into the theatre, impressing audiences that would not normally be part of the urban dance scene.

With seven strong performers, three women, four men, all with specialties that shine, it is their love of the groove of the music that distinguishes this dance style from other forms. And within that intrinsic, visceral play of dance and music, lies the joy.

Focusing on rocking, b-boying, house dancing and pantsula- a street dance from Soweto, the evening was broken up into dance pieces that included different musical styles and even the dancers providing their own scat singing accompaniment. Music composition by Sajjad Musa and Nicholas Nocchi aka "Niko Noki" ensured that lyric-less music spoken in English focussed on the dance. With many languages spoken by the performers who used text to supplement the dance, the idea of street dance breaking boundaries and borders uniting people into a crew is a positive one indeed.

Wary the Warrior’s top rock lightning swift footwork was a pleasure to watch and his earnest  persona won the audience over.

Essence, know for her waacking and house styles, was a solid performer with fiercely athletic movement.

It was a duet between the lithe Julie Rock and the effervescent Melly Mel that encapsulated all that is hip hop. The two women, in unison, just dancing: no tricks, nothing fancy just great dancing, and two friends letting us in our their joy.

It is Crazy Smooth, though, whose choreography is unique enough to sustain an entire show, working with his dancers to create unison while allowing them to maintain their own flavour, an important aspect of street culture, that makes you sit up in your seat, and mutter, “Damn, he’s good.”

One more show tonight at The Cultch:http://thecultch.com/tickets/