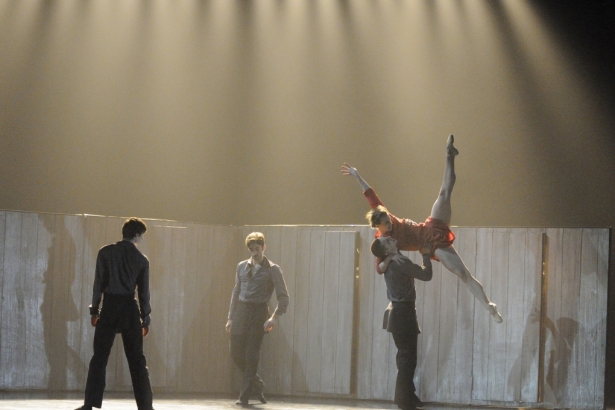 After a hugely successful summer, Ballet BC, under the directorship of Emily Molnar, continues its mandate of attracting cutting edge choreographers lured to Vancouver because of the superb Ballet BC dancers. Ballet BC presents Tilt at the Queen Elizabeth Theatre from October 17-19, 2013 for three evening performances at 8:00 pm, featuring two World Premieres and the return of Walking Mad, an audience favourite from the 2012 dance season.

“Our summer was just what we needed right now; it really brought us together, “shared Molnar, who was just been given another three year contract with Ballet BC because of the steady growth of the company's artistic excellence and financial stability under her directorship. “To build our audience base and to perform at a historic monument  (Jacob’s Pillow) was very exciting."

In July, Ballet BC performed at the prestigious dance festival at Jacob’s Pillow in Massachusetts and at the Festival des Arts de Saint-Sauveur in Quebec, playing to sold-out houses and standing ovations. In its excellent review the Boston Globe said, “…the subtle wit and the dancers’ commitment to every moment held us in thrall.” The paper went on to call Ballet BC “…a celebration of individuality…requiring an exactitude that this company delivers with unfussy virtuosity.”  The Berkshire Eagle called the company “…something markedly different, and immensely stimulating in an edge-of-your-seat kind of way.”

Bringing that confidence and experience builds on the company’s already substantial  kudos.

Set to Ravel’s Bolero, Walking Mad by was an instant hit with audiences and critics when Ballet BC premiered the work in Vancouver in 2012. Inger originally created Walking Mad for Netherlands Dance Theatre in 2001 where he remains as Associate Choreographer.  “It has been in credibly successful around the world and has won many awards, “explained Molnar.

“It is a huge compliment that Jormo wanted to created a new work on us, “enthused Molnar, speaking of Finnish choreographer Jorma Elo, whose 1st Flash in February 2011 for Ballet BC prompted the commission of this World Premiere.

Tilt also features a World Premiere by Molnar with a new work that reflects her passion to push the boundaries of contemporary dance with her signature complex and sensual choreography.  Using  the full company of 18 dancers , she is working with Dirk Haubrich, a German Composer  based in Berlin, known for his work with the Frankfurt Ballet and Jiri Killian.