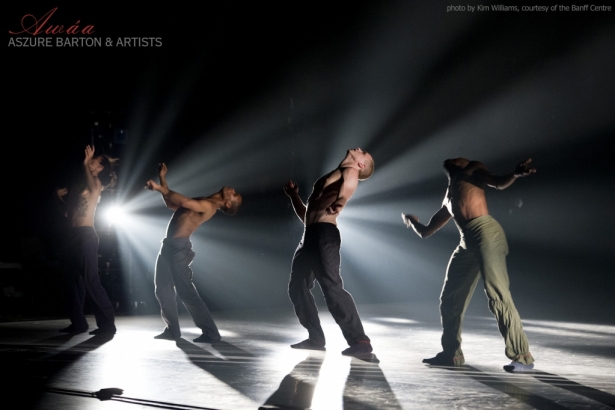 Contemporary dance is not always a linear journey to story, but is rather an expression of the choreographer’s and dance artists’ emotional states and internal voices. In Aszure Barton’s Awáa produced by Chutzpah! PLUS and running at the Norman and Annette Rothstein Theatre October 24 – 28, dance is being served with the finest artists working in the genre today.

Aszure Barton was born and raised in Canada and has collaborated with and created works for Mikhail Baryshnikov, Hell’s Kitchen Dance, The National Ballet of Canada, Nederlands Dans Theater, American Ballet Theatre, Sydney Dance Company, Hubbard Street Dance Chicago, The Martha Graham Dance Company, Les Chiche Capon, The Juilliard School, Ballet BC, The Chutzpah! Festival and BJM: Les Ballets Jazz de Montréal (Resident Choreographer 2005 to 2008), among many others. Aszure is an artist in residence at The Banff Centre in Canada, and is the proclaimed official Ambassador of Contemporary Choreography in Alberta, Canada.

Originally from Vancouver, Barclay spent her formative years at the National Ballet of Canada winning the acclaimed Peter Dwyer scholarship and the Eric Bruhn award for most promising dancer. Chosen to perform Peggy Baker's solo Brahm’s Waltzes  and the prestigious John Neuemier School in Hamburg Germany in 1994.

She went on to spend the next 12 years dancing with various European companies and choreographers such as Martin Stiefermann, Jan Lauwers and Ballet Manheim under the direction of Kevin O’Day and Dominique Dumais. She has collaborated with Canadian choreographers Crystal Pite, Matjash Mrozewski, James Kudelka, Susan McKenzie, Robert Glumbek, Sasha Ivanochko and spent three years touring with Toronto Dance Theatre.

She has taught in numerous Lower Mainland schools including Arts Umbrella Dance.

“Her process for Awáa was very unique. It started from a personal, intimate place whereby each dancer connected with an emotion or story belonging to their past. It eventually grew into a vast movement vocabulary that was shared with the entire company so that we were all well versed in each other’s material.

"It was a beautiful way to share and learn from one another. Sometimes Aszure would demonstrate a new phrase, and at other times, a dancer would teach material to the rest of the group.  She has a huge appreciation for unison work and will often study one single gesture to ensure everyone can dance it similarly."

What exactly does Awáa mean?

“It seems we are less interested in the literal meaning of Awáa and more drawn to the way it sounds," said Barclay. "It is not a coincidence that Awáa sounds like 'mama,' 'water' and 'away.'”

Awáa is a very personal piece and so the themes vary according to each experience.  Overall, the piece seems to be an appreciation of life, growth and death. The role of the feminine is a reoccurring theme, as well as memory and loss.  Water is something that carries us through the piece, whether it be in the form of a womb, replenishment, or a tear, it is a vital part of the journey."

Tickets available at 604-257-5111 (no service charge by phone) or online at www.chutzpahfestival.com or TicketsTonight.ca

Quirky, deep, cheeky and poignant...astonishes the eye’   Globe and Mail